What is the most interesting behind the next generation of Galaxy S before it gets launched? The one and only is its leaked news. This time, Galaxy S8 leaked is begin to be hype. What’s something special about this?

As a leaked news, of course, the truth is still on half-baked. But if you believe that the leaked is the delayed fact, please read the article below thoroughly.

Recently, the leaked specs of the Galaxy S8 seem to be headlines in some gadget media. One of the latest reported by PhoneArena, Friday (3/10/2017), said that the smartphone that predicted to be a #TheNextGalaxy has a body design that soars high with the size ratio of the screen is greater. It makes the bezel on the top and bottom of the body being so thin.

If we look at it from the front, the ratio of the screen that carried the Galaxy S8 is almost similar to the screen of the LG G6 recently introduced at the Mobile World Congress (MWC) in 2017. Even so, this screen can not beat the Xiaomi Mi Mix that already bezel-less.

In addition, there are additional technology HDR10 previously shown on the Galaxy Note 7 which is not be launched. This technology makes the multimedia experience will be great because the appearance of  the image is sharp with a good level of contrast that makes eyes comfortable.

2. Without The Home Button

Surprisingly, the smartphone which is suspected as the Galaxy S8 does not have the home button on the front of the screen. In fact, this button is one of the identities of the smartphone output Samsung. 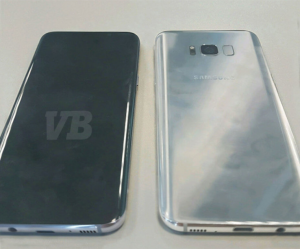 Even so, if viewed from the back, the design of the Galaxy S8 has almost no significant difference with its predecessor which carries the design of a combination of metal and glass. On the bottom, this smartphone looks to have a USB-C port, stereo speakers grille, and microphone.

Other rumors also said that this family the next Galaxy S will come with 2 type, namely the Galaxy S8 which has a screen of 5.8 inches and S8 Plus as the largest with 6.2 inches screen. Both equally carry a resolution Quad HD and use a Super AMOLED panel.

Then what about the hardware? Galaxy S8 is already certain to be carrying the latest Snapdragon 835 for the market in the United States. While for the version global using homemade chipset, between the Exynos 8895 M and 8895V.

Besides the memory sector, the growing speculation called the Galaxy S8 will have a 6 GB RAM capacity. On the other hand, Samsung reportedly is developing a chipset to support the 8 GB RAM component, but can not yet be known whether the chipset will be used for the Galaxy S8 or not.

About the performance, a site leaks the benchmarks touted comes from the hardware that carried the Galaxy S8. If the benchmark is factual, then it is confirmed Samsung again dominate the ladders powerhouse smartphones such as the clan Galaxy S advance. 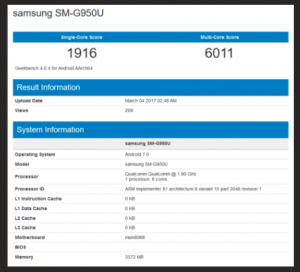 The Galaxy S clan known as a smartphone with camera features that dominate the quality of the captured image in the realm of the flagship, of course, Samsung does not want to Galaxy S8 will appear mediocre on this feature.

For selfie-addicted, the Galaxy S8 will have a front camera of 8 MP with dual lens and LED flash. In fact, rumors are growing also mention that the front camera of this smartphone features autofocus technology that makes the captured image will be sharper. While for the main camera, Galaxy S8 will carry a dual camera with 13 MP resolution and a sensor made by Sony.

Well, according to you should Galaxy S8 is present as this rumor or it could be more sophisticated? Whatever it was, hopefully, the expectations will be more beautiful than reality.