For those who are going to perform the pilgrimage to Mecca, there is a new application called iMabrur. This app contains a handy guide that helps facilitate pilgrims and Umrah before and during their journey of worship in the Mecca, Saudi Arabia.

The good news, although this application is made by Indosat Ooredoo, iMabrur can be used by people in all cellular operator numbers. Can also use any carrier data network including Wi-Fi and to be able to enjoy this application is not required registration or login.

Parties Indosat called the presence of this iMabrur application as a form of commitment to better understand the needs of its customers, especially for those who will and are performing one of the most coveted worship of this Muslim.

“iMabrur since the beginning, was created to help the pilgrims and Umrah to make it easier and comfortable in performing their worship, both during the haj and umrah,” said Deva Rachman, Group Head of Corporate Communications Indosat Ooredoo. 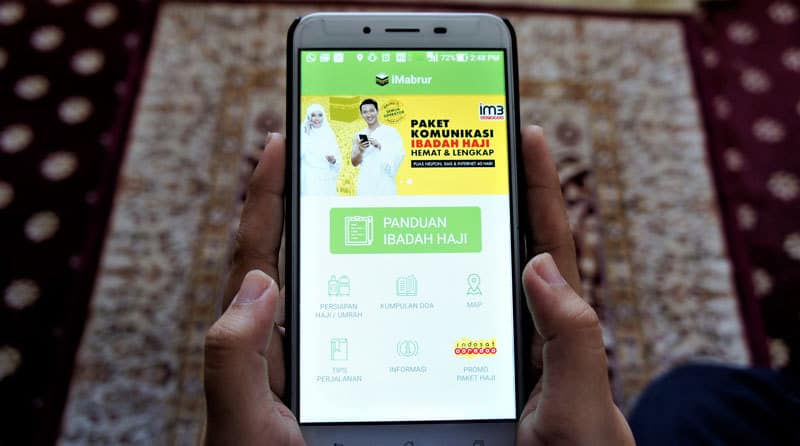 This application also features an Interactive Map featuring a map of the Grand Mosque along with the location of the gate number/entrance, as well as the location of the place of ablution and toilets around the Grand Mosque. iMabrur application also provides Friend Tracking feature, so that the congregation can see and track the positions of husbands, wives, children, relatives and other companions during the pilgrimage and Umrah in the interactive map.

To make it easier for the congregation, iMabrur add features Travel Tips in the form of various interesting articles to support the journey of pilgrims during the pilgrimage and Umrah. Like where the shopping location to buy souvenirs, as well as a brief dictionary containing a particular vocabulary in Arabic commonly used in everyday conversation.

The iMabrur application also includes Information in the form of a collection of important contact numbers regarding the implementation of Hajj and Umrah travel in Saudi Arabia, as well as an application guide that facilitates pilgrims in searching for the specific information required in emergency situations.

Especially for Indosat Ooredoo users, iMabrur also provides communication service feature Hajj Promo Packages that can be activated through this feature. In addition, Indosat Ooredoo card users will get FREE bonus calling from Saudi Arabia to any destination number in Indonesia for 60 seconds.

For a while, this app is available for Android-based smart phones, while for the iOS operating system will be launched in the near future. Customers can download this free app through the Google Play Store using the keyword ‘iMabrur’. This application can work if using Android operating system version 4.0 or more.