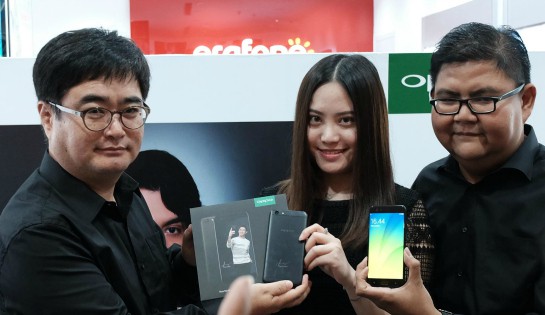 After the successful of Raisa Phone which is an F1s  series, OPPO launched limited edition smartphone for OPPO F3. This time, the selfie expert who appointed as the name of the smartphone is the actor Reza Rahadian.

Entitled OPPO F3 Reza Rahadian Limited Edition, the smartphone is the black color version of  F3 gold that released earlier in the market. From specifications and design is no different, just on the texture of the body of the smartphone is impressed more matte aka rough when gripped.

As we know, the OPPO F3 is the version “mini” of the F3 Plus with a 5.5-inch screen that offers a dual-selfie camera as a key feature, in which one lens has 16 MP resolution for a conventional selfie and the other one with 8 MP resolution  in wide-angle lens up to 120 degrees for selfie group. For the hardware, this smartphone is powered by octa-core processor, 4 GB RAM, and 64 GB internal memory which can be expanded up to 128 GB with microSD.

Just like the name, OPPO F3 Reza Rahadian Limited Edition produced in very limited i.e. only 600 units and features a special packaging in which there is the exclusive gift that contains Reza Rahadian collectible item. In sales, OPPO took Erafone as a partner-exclusive to pre-order that open from 3-8 June 2017 in the online store Erafone.com and 57 network store Erafone spread all over Indonesia.

“We are very proud to be given the trust by the OPPO to roll out a pre-order exclusive. Of course, we will strive to provide the best service during pre-order and help increase OPPO market positioning in Indonesia. With the big name of OPPO and Reza Rahadian, it seems will not be too difficult to spend this smartphone in short time,” said Jong Woo Kim, COO of PT Erafone Artha Retailindo in a press conference that held on Tuesday (5/30/2017).

Meanwhile, Aryo Meidianto, Media Engagement OPPO Indonesia reveals,  Reza Rahadian has been chosen as the figure behind the name of the smartphone special edition because he’s an actor that has a good reputation, close to fans, and has macho appearance.

“Certainly, all of our brand ambassadors must have good engagement with fans and have the initiative to introduce the advantages of products of OPPO in various occasions such as social media,” he said.

Aryo added though Reza is not a public figure that exists in social media such as other selfie expert, according to him, these actors have a large fanbase. Even before the launch of smartphones this special edition, it’s been getting feedback that the fans Reza very enthusiastically waiting for it.

“Based on our experience, the most customer of Raisa Phone is Raisa fans. I think, with the number of fans as much as 300 thousand people, not including the existing base in other areas, I am optimistic that sales of this smartphone will be fast,” said Aryo.

The reason OPPO is fairly reasonable, considering the Reza itself is not a rookie actor. The man who started his career as a model is recorded to have starred in dozens of film titles, which almost them has reach the top of the box office. He also won two awards Indonesian Film Festival (FFI) and the Indonesian Movie Awards (IMA) for the Best Actor category. 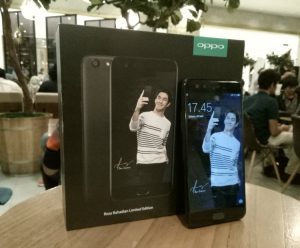 OPPO F3 Reza Rahadian Limited Edition priced at Usd 4,399 million. Not only give an exclusive gift, for the first 25 buyers will be invited to a meet & greet with the actor’s “My Stupid Boss” at iftar which will be held by OPPO.

So rather than run out, better mark your calendar you from now on to schedule the sale of this smartphone, Gizmolovers!