6 Things You Need to Know About Oppo F3 Smartphone

byChandra Wirawan
in News
Reading Time: 4 mins read
A A
0

Following the success of the F3 Plus, Oppo F3 smartphone finally appeared in Indonesia. Sold through a pre-orders, this smartphone offers advantages that are not owned by the older brother.

The advantages of Oppo F3 smartphone moreover, if not its size that is smaller compared to the F3 Plus. For some people, the F3 Plus might be considered too large and less compact because the screen reaches 6 inches. While on the F3, the screen size of 5.5 inches that is certainly more easily grasped, especially for a user who has small hands.

It’s not just size that is small, Oppo F3 smartphone also has a thickness of 7.3 mm which makes it 27% thinner than the F3 Plus. Likewise with a weight of only 153 g. So there seems to be no reason for the user to steadily bring it with you anywhere and ready to unstoppable selfie anytime.

Still, Rely On Selfie Features as the Headline

Selfie? Yes, like the elder brother, Oppo F3 smartphone still offers selfie features as one of the main advantages. But, on the front camera, this smartphone comes with a resolution of 13 MP, different with the F3 Plus that carries a 16 MP camera.

Fortunately, the Oppo does not decrease dual-camera features for selfies. So it features like dual camera 6 MP (1/3.1″ sensor size, F/2.0) + 8 MP, F/2.4) that the F3 Plus have can be enjoyed by users without reducing quality and excellence.

As well as, the F3 Plus, with the dual-camera feature, the other one camera Oppo F3 smartphone can produce group selfies wider because it brings a lens of 120 degrees. So, users don’t need a selfie stick to get the selfie rollicking in which all objects are in one frame without a cut.

As mentioned above, the Oppo F3 has a design that is small and thin compared to the F3 Plus. However, the Oppo at all does not reduce a luxury touch on this smartphone, with the involvement of aluminum material which is processed with 220 fine zirconium sandblasting to make it more comfortable to grip, and still highlight the impression of charming when viewed. However, the 6-strings antenna existing on the F3 Plus to be absent, replaced with antenna single striped in the bottom and top of the body behind.

With a screen size that small, there is no reduction in quality. Precisely the Oppo F3 smartphone has a pixel density which is high at 401 ppi so that it is able to display a detailed image of the resolution which is Full HD. Gorilla Glass 5 protection is also not absent in this smartphone so it makes the screen protected from various kinds of unwanted scratches.

As mentioned above, the Oppo F3 smartphone has a design that is smaller and thinner compared to the F3 Plus. However, the Oppo at all does not reduce a touch of luxury on this smartphone, with the involvement of aluminum material which is processed with 220 fine zirconium sandblasting to make it more comfortable to grip, and still highlight the impression of charming when viewed. However, the 6-strings antenna existing on the F3 Plus to be absent, replaced with antenna striped single in the bottom and top of the body behind.
Keep Bringing Fingerprint Scanner Feature, Minus the VOOC 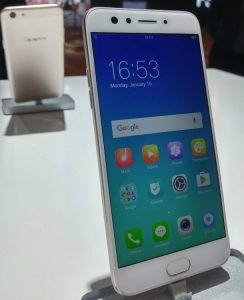 F3 Plus feature which is not less important to carry on the Oppo F3  is the fingerprint scanner named Lightning-Fast Touch Acces that is able to secure the use of a smartphone from the hands of ignorant and give access of 0.2 seconds to the user. There is no denying it, this feature is one of the best compared to the same features on other smartphones because users do not need to press the fingerprint scanner.

Unfortunately, fVOOC Flash Charge feature must be absent on the Oppo F3 smartphone. As his successor, this smartphone that has 3200 mAh battery comes with the 5A 2 A charger for the quicker time charging, although not as fast as VOOC, which allows the user to charge the battery in less than 2 hours.

Chipset Based on MediaTek

Not like the sibling that powered by Qualcomm chipset MSM8976 Pro Snapdragon 653, Oppo F3 smartphone prefer to have a MediaTek MT6750T. But do not worry, for the smartphone segment of the middle class, this octa-core chipset that with 1.5 GHz clocking speed is quite qualified for the needs of mobile users, ranging from social media to multitasking. Moreover, the smartphone runs with ColorOS 3.0 based on Android 6.0 Marshmallow and has 4 GB RAM and 68 GB  internal memory which can be expanded up to 256 GB.

The Price Is Cheaper

Well, considering the F3 is a mini version of F3 Plus, of course, the price offered is also more mini, isn’t it? Yes, the smartphone is priced at Rp 4,399 million on the pre-order which takes place may 4 to May 12, 2017, in some e-commerce and a whole network of Oppo Store, with a gift bag exclusively from FC Barcelona that priced at Rp 1.2 million to first of 30,000 customers.

So, if you feel Oppo F3 Plus is too large and not affordable, this smartphone seems to be could be the great alternative to having.