What differentiates the market leader with new players is their way of doing business. If a new player focuses more on selling the product to sell in the market, then the market leader further improves the user experience and after-sales service. At least, that’s what we noticed in the mobile industry. One recent example is Samsung which last week launched the Galaxy International Experience Store.

Its name is rather long, in contrast to a number of other official outlets labeled Samsung Experience Store. This is because Galaxy International Experience Store (GIES) is Samsung’s first and largest outlet in Southeast Asia. The concept was made more magnificent, premium and equipped with advanced facilities.

According to Jae Hoon Kwon, President of Samsung Electronics Indonesia, the inauguration of Galaxy International Experience Store is a big step Samsung brings futuristic experience through smartphone and its ecosystem, especially for the people of Indonesia. GIES is built with a thick concept with a more sophisticated and premium impression with complete facilities.

“In addition to delivering comprehensive solutions for users, from interactive digital experiences, product consulting to complete after-sales services, we are also the first to provide a fluent promoter of several foreign languages to serve international consumers and training areas that provide free learning for users and the young generation to optimize the devices, both for their productivity and for creating content and applications, “said Kwon at the opening of GIES at Lotte Avenue, Jakarta (29/9).

Further explained, Galaxy International Experience Store is more priority for the user experience, in order to optimize smartphone owned. In order for them to feel more comfortable using Samsung mobile phones because they know the benefit 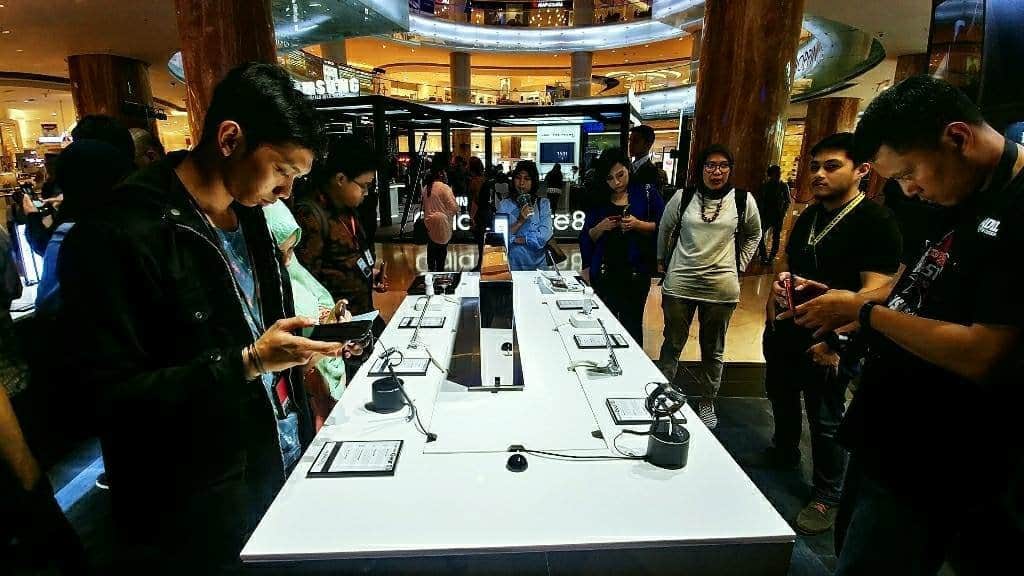 To establish the Galaxy International Experience Store, Samsung does not work alone. Instead of giving operational to partners. The South Korean electronics giant is working with PT Nusa Abadi Sukses Artha, a subsidiary of Erajaya Group.

In addition to Samsung, Erajaya is also known to work with other brands namely Xiaomi to build Mi Home experience store in a number of places. Erajaya also has its own outlet called Gerai Erafone Megastore which is multi-brand. And iBox Apple Flagship Store is specialized in selling Apple products.

For Erajaya, managing GIES of more than 500 square meters is a challenge as well as its own achievements to be able to realize the desire of Samsung. Because this is not just an ordinary experience store and has never made anything like this before. Galaxy International Experience Store consists of a massive experience area and more interactive with consumers. There is an after-sales area, sales transactions, training rooms, and Caribou Coffee Shop which makes these GIES more convenient and enjoyable for visitors.

Budiarto Halim, President Director of Erajaya Group also admitted very happy to cooperate with Samsung to operate this GIES. Certainly happy because it means there is a new income post for companies that have long been known to distribute mobile phones since this Nokia era.

“Samsung is a highly sought after product, and GIES on Lotte Shopping Avenue is the 67th store we operate in. The Galaxy International Experience Store puts forward experience and education, in addition to providing after sales and product consulting services,” said Budiarto.

Samsung’s experience store concept indeed makes visitors feel at home. When the authors visit there, can directly try the latest range of Samsung products, including enjoying the sensation of using Gear VR. Samsung provides three seats that visitors can try to enjoy virtual reality with more leverage. As in 4D cinema, the seat can move following the attraction of Virtual Reality content.

And more fun, of course, is the presence of a Caribou coffee shop with a full menu selection such as a coffee and food. After purchasing a mobile phone or making a repair product, for example, we can order coffee while working there. Not buying a cell phone is not forbidden to order coffee.

In essence, Samsung has been at a high level to pamper its customers. They understand the needs as well as following the present trend.

At the same time with the inauguration of the GIES, Samsung is also selling its new flagship Galaxy Note8. Armed with the best features in the industry, the consumer’s welcome on the pre-order Galaxy Note8 is called positive.

“The consumer’s response to the Galaxy Note8 pre-order offer is very positive and exceeds our expectations. Many consumers are already looking forward to the presence of Galaxy Note8 after we last sold the Galaxy Note5, “said Vebbyna Kaunang, IT & Mobile Marketing Director of Samsung Electronics Indonesia.

No wonder if consumers have long been waiting for the new series Galaxy Note. Because of the series before this, the Galaxy Note 7 failed to circulate in the market after stumbling explosion cases some mobile phone. Even the mobile phone is prohibited carried by passengers by almost all airlines.

Now Samsung’s hard work to fix errors in Note7 looks set to work.. Although the price is quite expensive that starting from IDR 13 million for the most basic package, still who hunted the premium phone a lot.

Onno W Purbo: Ahead of the 2019 Election, Big Data Will Be Booming in Indonesia

Onno W Purbo: Ahead of the 2019 Election, Big Data Will Be Booming in Indonesia