Trisaksri Ghost Repellent: This Device Can Make You See Ghost Existence and Excorcise Them

byChandra Wirawan
in News
Reading Time: 2 mins read
A A
0

Do you feel your house is so haunted? Often plagued with ghost sightings? Don’t worry, a company in Thailand has created a device that could annihilate your fear. 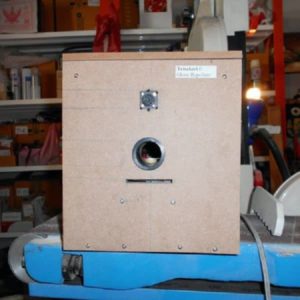 In the middle of the advances in technology like nowadays, a supernatural think like a ghost presence is not something to be believed. But it is precisely the technology used as a medium that seemed to reinforce the existence of invisible thing, like a ghost. At least Trisaksri Ghost Repellent prove that the technology and the supernatural can be put together through a device.

Made by a company called Boondee Workshop, the products are specialized such as a subwoofer which is wrapped with wooden box has made the world got shocked since first launched in the year 2009. Because, a lot of bloggers technology that has write capabilities of this device in the scan ghost sightings and sent her away with a beam of radio waves.

After 7 years of its launch, Boondee Workshop presenting the latest generation of the Trisaksri Ghost Repellent this year. Named Trisaksri 2.0, this device is claimed to have a lot of improvement compared to the previous generation. From the technology side, this device uses infrared cameras and electromagnetic waves to detect the presence of spirits and utilizing radio wave as “Wave Killer” to kick them out.

Honesty, there is no significant difference spelled out the Boondee, but on the device Trisaksri previously had a power of 110 volts, while a new generation carries 220 volt with a weight of about 2.9 kg. For the consumer still remains the same, the user need only press the On/Off button to activate it.

For the price tag, Boondee Workshop give you a price Trisaksri amounting to US$ 1,500 not including postage charge US$ 150. If calculated in rupiah exchange rate, to buy this device needed to pay Rp 20 millions. Indeed the price is expensive, almost equal to the price of the product to your home theatre. But for those whose lives are filled with fear because of the ghost sightings, the expensive price doesn’t seem like a problem.

Unfortunately, until now there has been no claim that proves the success of this device in banishing the ghosts. But even so, this product is quite anticipated. Are you interested enough?