byTim Gizmo
in Review
Reading Time: 7 mins read
A A
0

Speaking of the smart band, Huawei has released its first version since 2017. But unlike the realme that really new penetrated into the world of wearables, Huawei has plunged far earlier through several smart band and smartwatch devices since a few years ago. Now the Chinese company presents Huawei Band 4, a smart band which in my opinion is not attracting much attention.

Why is that? I don’t really know myself either. This device is better known as a bonus accessory from the sales of Huawei smartphones. Huawei itself does not seem to be giving promotion incessantly, compared with Xiaomi with their Mi Band series or the realm with the Band realm. In fact, the features of the Huawei Band 4 are also no less complete than its competitors.

In Indonesia alone, Huawei Band 4 has been officially introduced since October 2019. And it is precise because of the release of the many versions, unconsciously I am more confident if this smart band will provide a more superior user experience than others that are only the first or second generation. Then is this true? Immediately, this is my experience using Huawei Band 4 for more than one week of use. 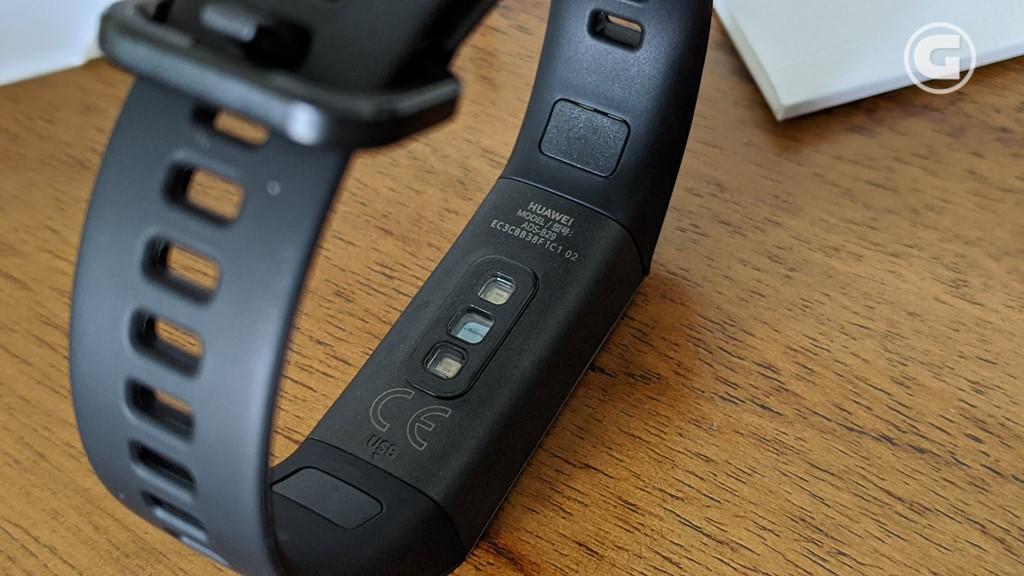 In terms of design, the Huawei Band 4 looks more sporty than the band’s realm that I previously reviewed. And also more conventional, different from the Band realm that the screen is made as if slightly curved, and seamless between the body with the strap. The material feels the same, and on the wrist, it’s equally comfortable.

Huawei Band 4 was released in three strap color choices, and coincidentally what I used was Graphite Black. The strap is certainly black, while the screen frame is made a little brighter near gray. Two other strap colors look more bright, Sakura Pink and Amber Sunrise.

Its own weight is 24 grams, aka 4 grams heavier than the band’s realm. But yes, it doesn’t feel, it’s just 4 grams. Both are equally comfortable and lightweight. When I first wanted to turn on this device, of course, I was looking for a way to remove the strap and charge the Huawei Band 4. Here I was surprised by the mechanism to remove the strap.

Unlike the realm of the Band which has to be pulled manually (with a sense of anxiety for long-term use), the bottom of the Huawei Band 4 strap seems to be equipped with a button, which if pressed, the strap will be detached from the body.

Really easy. When the strap opened, I was surprised again by the method of charging. But for that, I discuss in another part, yes. We first check the screen. 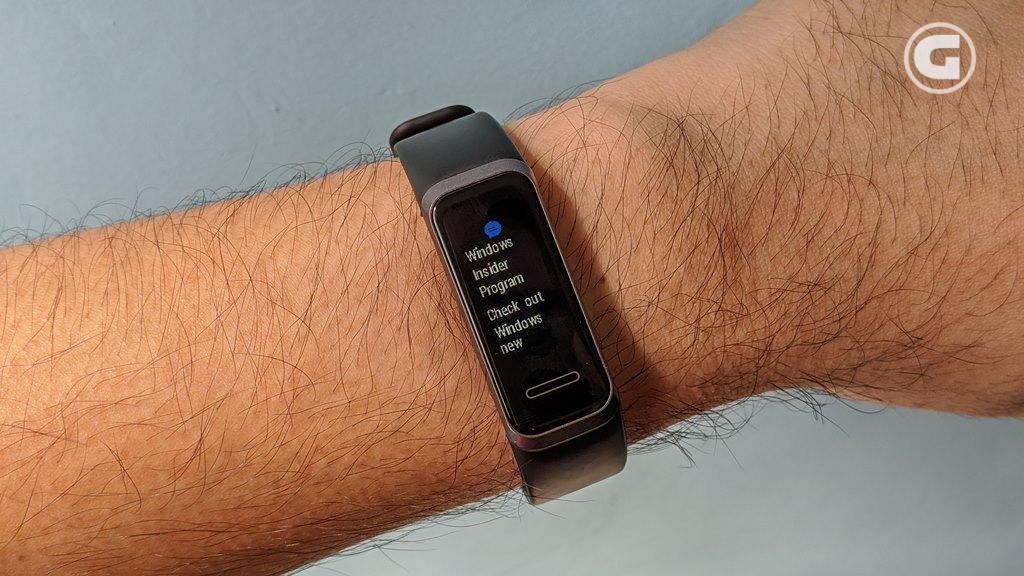 Huawei Band 4 has a 0.96-inch screen with a resolution of 160 x 80 pixels. The screen dimensions and pixel density are arguably standard. But what’s interesting, although there is a capacitive button below it, the Huawei Band 4 screen fully supports touch input, aka touchscreen. Operating the menu on this affordable smart band is very easy. While the screen quality itself is good, it looks bright even in the hot sun.

When viewed up close, it does look a little pixelated, but the resolution still allows me to read the message notifications on this Huawei smart band screen without frowning. Swipe up or down to switch views from watchface to sports shortcuts and more. Swipe from the left for notification access shortcuts, and use the capacitive buttons at the bottom of the screen to return to the watch face display.

And because of the touch screen, you can easily access features such as timers, stopwatches, adjust screen brightness, and more. There is also a wrist swivel feature to scroll from one menu to another. Not supported on always-on displays, users can set the Huawei Band 4 screen to stay on for up to 5 minutes. Of course, power consumption will be more wasteful huh.

Before discussing the features provided by Huawei Band 4, I want to tell you a little about how difficult it was when I first connected this smart band to the smartphone I was using. If the band’s realm yesterday, just download the link realm, run the pairing process, complete. Well, that doesn’t apply to Huawei Band 4.

For the record, I paired this device to Google Pixel 3 (can be connected to the iPhone as well, as long as using iOS 9 and above). The first application that I downloaded was Huawei Health. Once installed, I open, it turns out the application requires Huawei Mobile Services to run. Okay, back to Play Store, search, download, re-open Huawei Health. Apparently it still can’t. The reason? HMS is not the latest yet.

Then where is the latest version of HMS? Yup, Huawei AppGallery. So at a total of three applications that need to be installed so that this device can be active. I do not understand why the HMS on the Google Play Store has not been updated to the latest version, my guess is due to the limitations between Google and Huawei that are currently taking place. 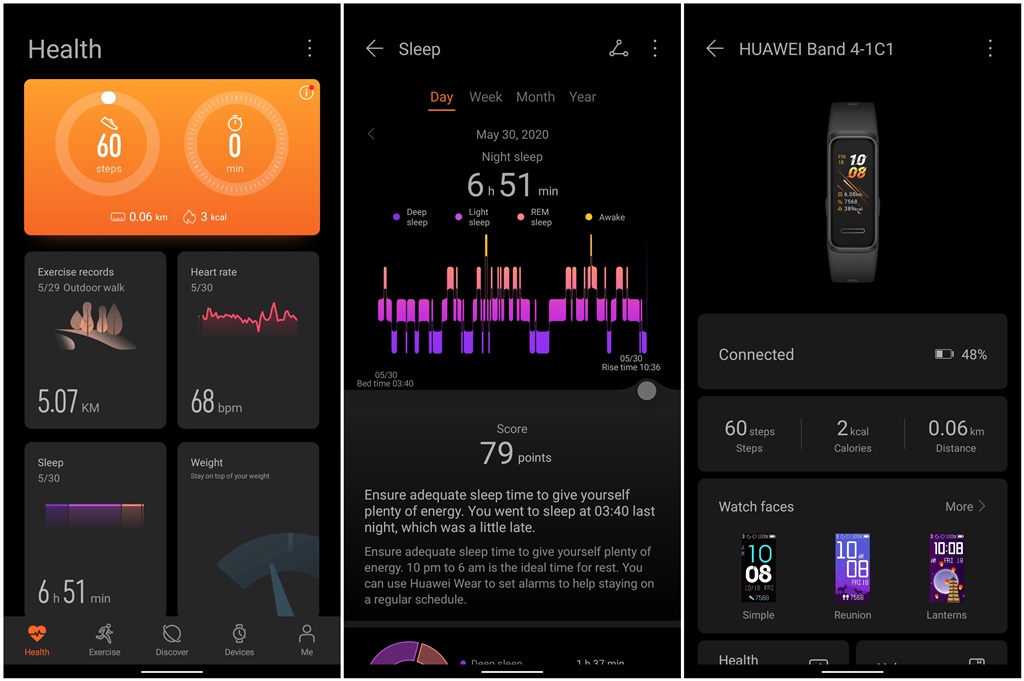 Once installed correctly, the pairing process is quite easy. Unfortunately for software updates, one version must be up one-by-one alias requires about 4-5 times the update. While the information displayed from Huawei Health is quite structured and detailed, it is easy to use. In fact, almost all types of information such as the number of steps, sleep quality, and others are given the option to save in image format, to be shared on Instagram Stories or the like.

Watchface options are also quite a lot, with quite comprehensive information such as time and date, a number of steps, kilometers that have been achieved, and calories burned. In addition to continuous heart rate detection, Huawei Band 4 can also remind users not to stay too long.

When being used for sports, Huawei Band 4 will display real-time information that is also easy to understand. Users cannot check incoming notifications, but can still control music directly. Hold the capacitive button below the screen to complete the exercise session.

Huawei TruSleep is able to produce detailed information shortly after the user awakens from sleep, presenting information such as light sleep, deep sleep, REM, and others. The recorded data will be processed to provide comprehensive advice to users. The data can also be exported automatically to Google Fit or MyFitnessPal.

In addition to the option to detect heart rates automatically, Huawei Band also features a feature to monitor SpO2 or oxygen levels in the blood. This feature can only be activated manually by selecting the menu on the smart band. It takes longer than just checking your heart rate, and the strap needs to be made tighter for the process to succeed. 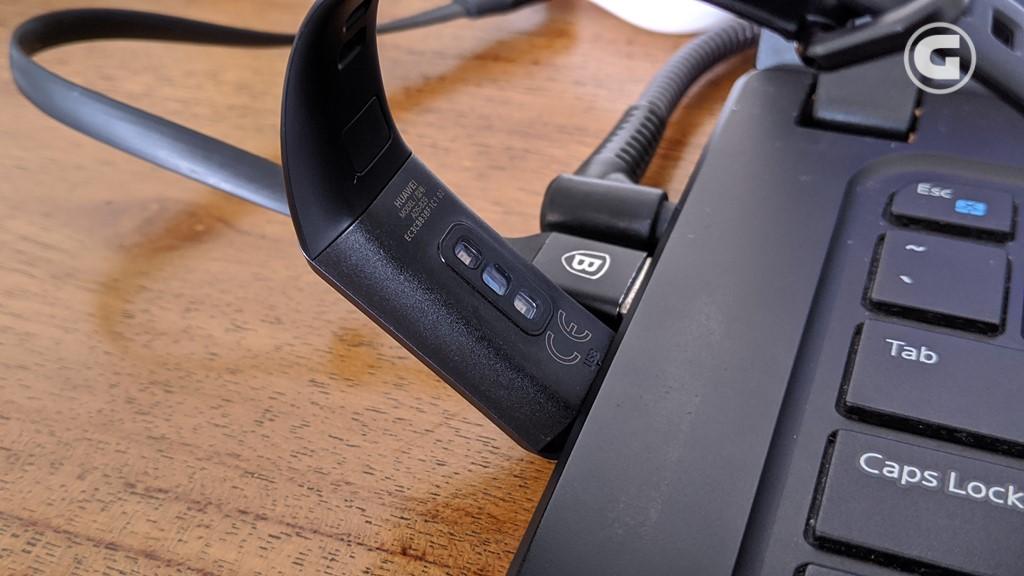 Huawei Band 4 has a small battery capacity of 91 mAh. The charging process takes about 1 hour more, and this device can run for about 7 days with the use of my a-la. All the features I activated such as the Huawei TruSleep and heart rate monitor, plus the feature to turn on the screen automatically when I raise my wrist. I also interact more actively using the touch screen than the previous smart band, so I think the battery’s endurance deserves thumbs up.

In the design section, I had said that I was surprised by the method of charging. Huawei Band 4 supports USB Direct Charge or does not need an additional charger cable. Just remove the strap, then look for a USB port such as a wall charger, laptop or power bank, already done. At first, I thought this feature was exclusive only in the realme Band, but it turns out that Huawei has adopted the same method first. 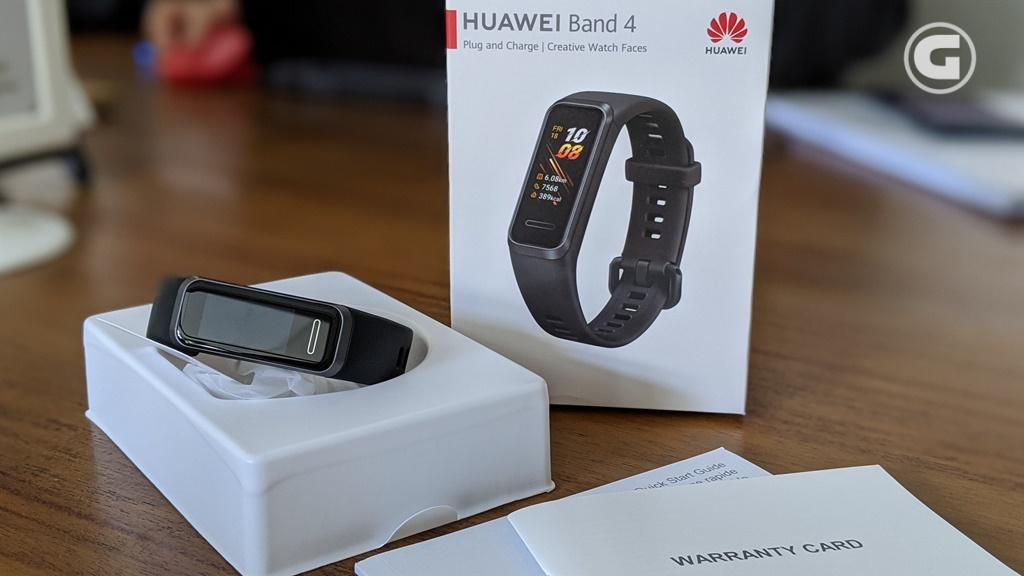 In my opinion, Huawei Band 4 is an underrated smart band. This smart band is not widely known, especially when compared to Mi Band or his own brother, Honor Band. In fact, the features offered are very complete and comprehensive. The application display is good (although the initial setup is rather complicated), the battery is durable, the touch screen makes it easy to read notifications, plus it’s already using USB Direct Charge.

When it first arrived in Indonesia, Huawei Band 4 was sold officially at a price of Rp.444 thousand. But now you can find it in e-commerce for Rp100 thousand cheaper, whether it has gone down or most are gift units from purchasing a Huawei smartphone. If indeed the budget is not up to Rp400 thousand, Huawei Band 4 is certainly suitable to be the first choice.

The Indonesian version of Huawei Band 4 review can be read in Gizmologi.ID

Although as if not glimpsed, Huawei Band 4 has a full feature and fun when used.