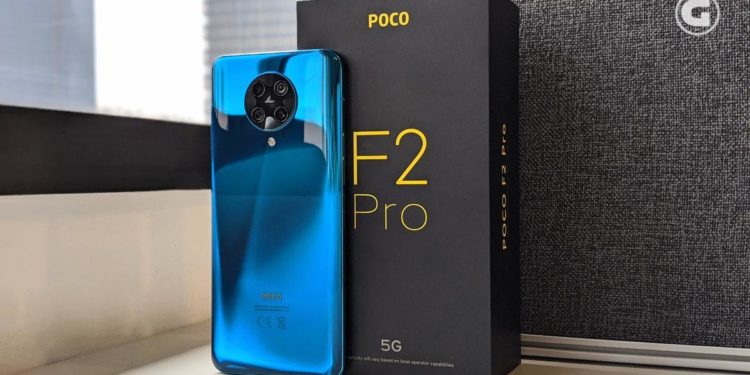 When Xiaomi Indonesia brought the Pocophone F1 series last August 2018, the impact is quite massive in the smartphone market of the country. Just imagine, starting from IDR4,5 million (around USD 300), you can already get a smartphone with the right average performance, using the best chipset at that time. But of course, it comes with many sacrifices such as design and ordinary camera, and the issue of the screen which was crowded.

I personally am more suited to smartphones that have good grades on all fronts. It doesn’t matter if the performance isn’t the fastest, as long as the camera is better and has a design that makes you confident when held. My impression changed completely when I first tried Poco F2 Pro, the successor who has fixed his identity.

The design is equivalent to today’s flagship, appearing in bright colors, and even has a full screen OLED screen using a pop-up camera mechanism, increasingly rare nowadays. And still prioritize performance, use Snapdragon 865 chipset and already supports 5G. As if nothing more was sacrificed.

So is it really more perfect? After a few days of using it as a daily driver, my overall impression was quite positive. Here’s a detailed review of the Poco F2 Pro, the newest affordable flagship from Poco in 2020. 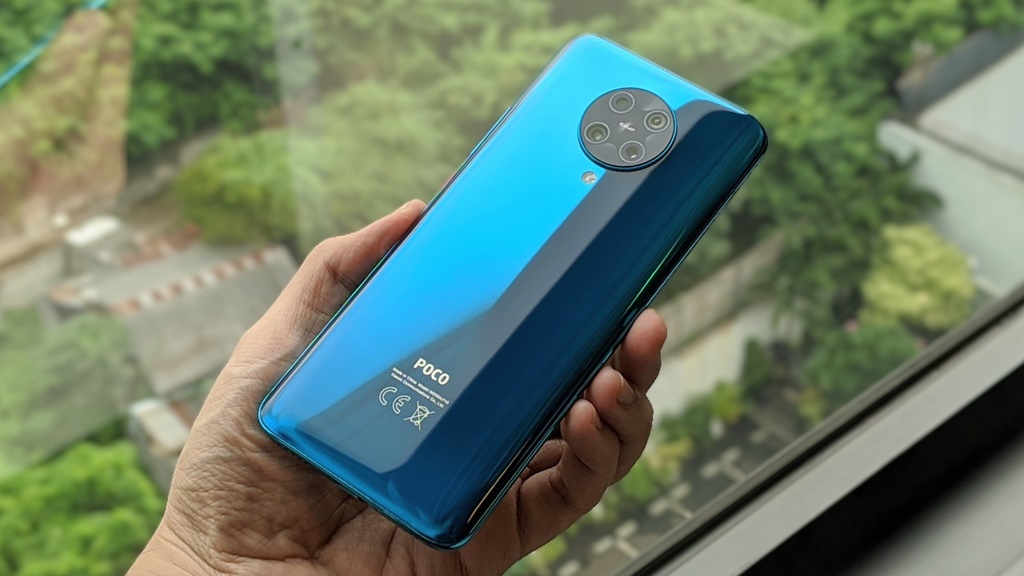 If the Pocophone F1 is made as if the origin of its performance is tight, with a less attractive plastic body, it is different from the Poco F2 Pro. This smartphone immediately feels premium since I first held it. Feels heavy, which in my opinion adds a sturdy impression. Yes, its weight reaches 219 grams. Why does it get heavy?

No longer use polycarbonate plastic material, both the front and back of the Poco F2 Pro are made of Gorilla Glass 5 coated glass, with a metal frame around it. The front is really just a full screen without interruption, while the rear camera module is made circular with the impression of the letter “X” in it. The Neon Blue color variant that I hold has a glossy finish, and of course a little easy to print fingerprints. 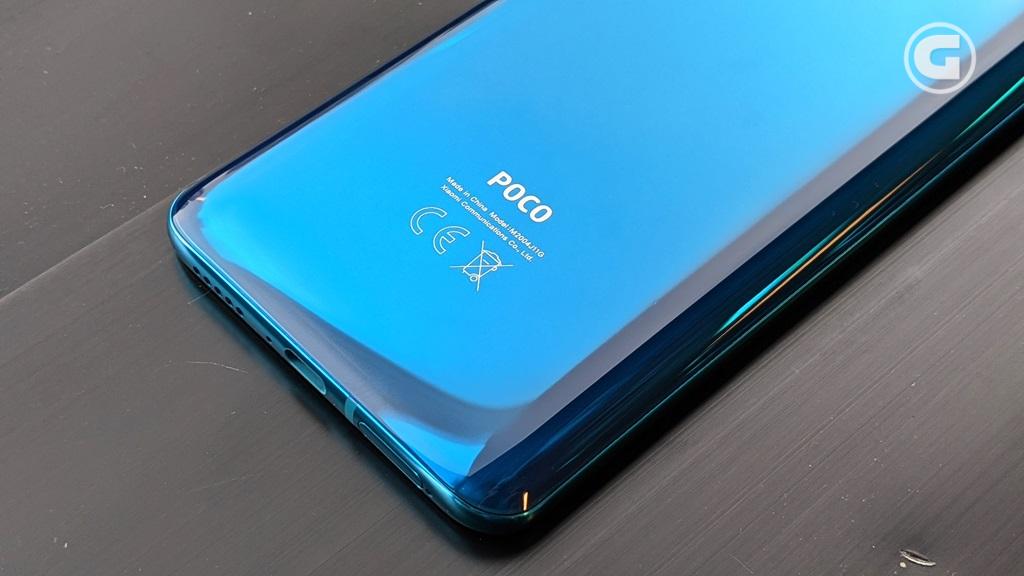 The volume and power buttons which have red accents are located on the right side of the body, feels precise when pressed. At the bottom there is a dual SIM slot, USB-C port, microphone and mono speaker. The top part is quite ‘busy’, consisting of a microphone, a 3.5mm audio jack (which is a plus), plus a pop-up camera mechanism adjacent to the infrared sensor. Oh yes, the notification LED is placed at the top of the pop-up camera.

With the design that is carried by Poco F2 Pro, you will not feel any loss having issued a pocket equivalent to other flagship. Excluding the sacrificed part, this smartphone looks and feels like a premium flagship. 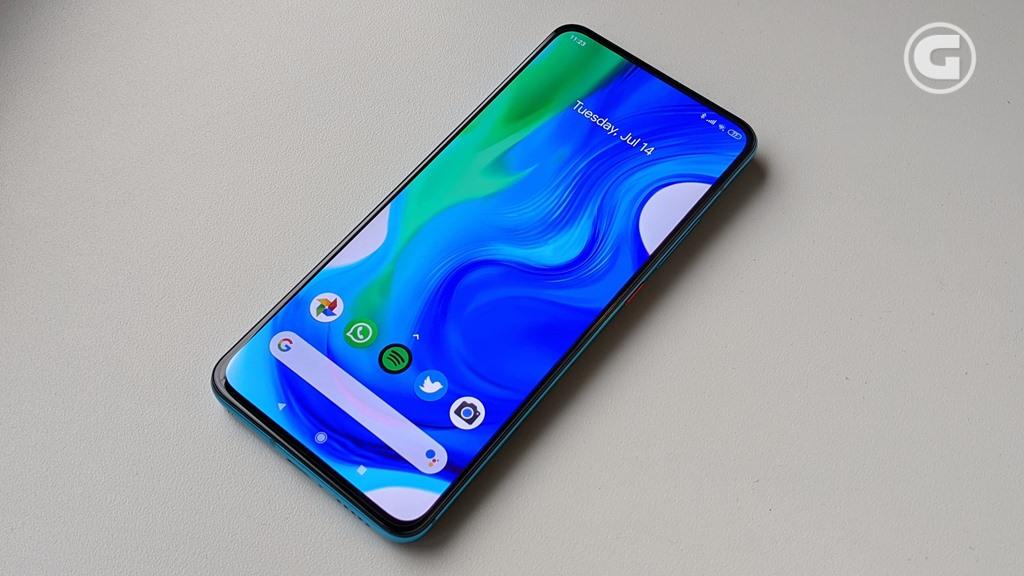 This is my first smartphone that has a really full screen without any noise or punch-hole camera. The dimensions are also large, at 6.67 inches with full HD + resolution and AMOLED panels. But still, the combination of the four thin bezels and the 20: 9 ratio makes this smartphone not too wide, still slim enough to be held in one hand.

The brightness level reaches 800 nits, and I have no problem seeing content on the screen in strong lighting conditions. This screen also supports HDR10 + content, 180Hz touch sampling rate and the DCI-P3 color gamut standard. Even Poco provides deep screen customization to the slider bar for each RGB color. 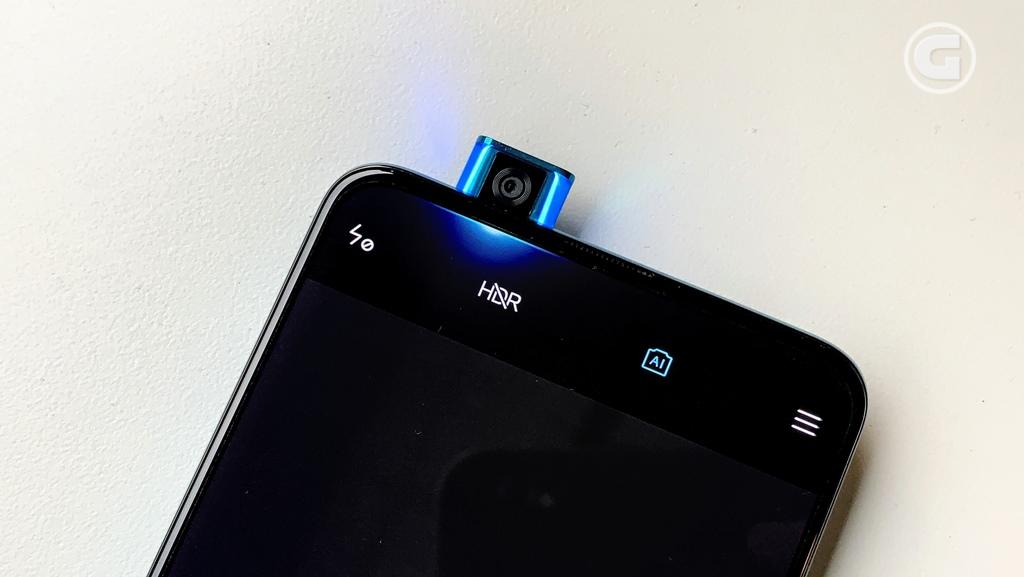 Then what is lacking? The first, Poco F2 Pro only has a conventional refresh rate of 60Hz. Maybe this is subjective, but I much prefer a 60Hz screen with an accurate AMOLED panel, rather than 120Hz but still use an IPS panel. The contrast and saturation make it very convenient to stream Netflix HD. Also present is always-on display feature with an elegant fluorescent light effect every time there is a notification to enter.

The second drawback is the fingerprint sensor. Embedded in the screen, the sensor of Poco F2 Pro is not the fastest. Still less fast than Mi Note 10, including its level of accuracy. Sometimes it can take up to a second — it might still sound short, but other smartphones in its class feel significantly faster. 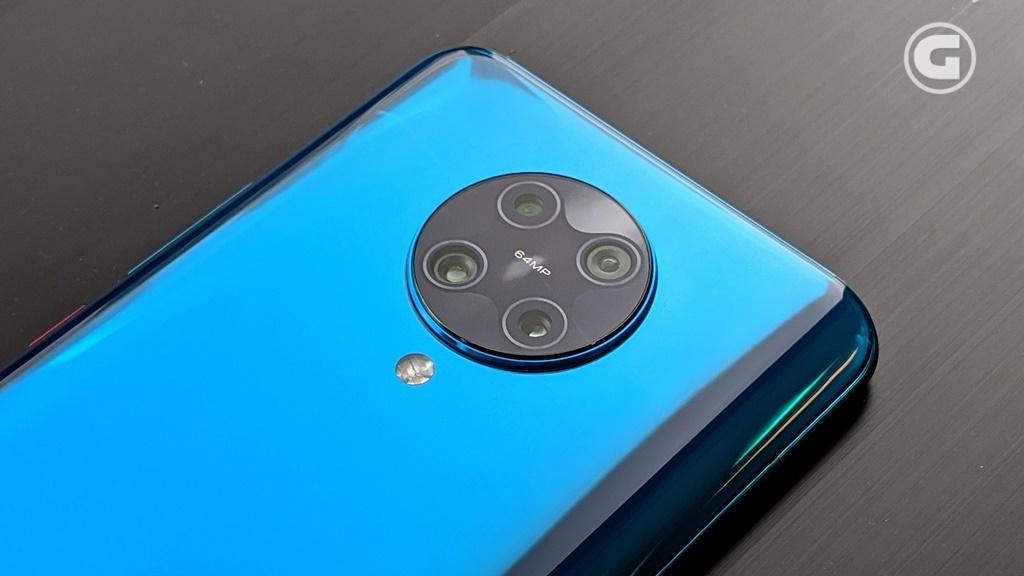 The features are of course also made a lot, ranging from automatic AI enhancement, Pro mode with focus peaking features, Night mode 2.0 and others. A little flaw lies in how we move from one sensor to another. Must use the button in the viewfinder, can not be shifted directly to the left or right. Digital zoom also has to be done with two-finger gestures, which is quite troublesome.

Of course, when compared to the Mi Note 10 which became the flagship camera for Xiaomi, the results of the Poco F2 Pro photo will be less competitive. But it also does not disappoint. The photos from the main sensor are quite good in all conditions, the resulting color is not excessive and close to the original condition. When switching to ultra-wide sensors, in addition to reduced detail, dynamic range also becomes more limited.

While the telemacro sensor is interesting. I find taking photos of close objects using Poco F2 Pro easier. The digital zoom reaches 10x zoom, but for results that are still eligible to be shared on social media, at least 5x the maximum limit.

In low light conditions, make sure your hands remain stable considering this smartphone is not equipped with OIS. While the night mode is not the best — it can provide a brighter photo display, but there isn’t much detail that can be improved through this mode. But overall, it can still be compared to other smartphones in its class that also use fast chipsets.

The EIS feature works up to 4K 30fps, but for Steady video mode, it can only be up to 1080p 30fps. Professional modes for video recording and VLOG mode are also present. Users only need to record a few short videos, and the smartphone will process them with filters and interesting effects through the help of AI.

The results of the front camera in my opinion looks normal, although the resolution is quite large at 20MP f / 2.0. Quite sharp, but skin tones tend to look a little warmer. The portrait mode comes with some studio lightning effects to enhance your photos. If you want to see more details, the catch from Poco F2 Pro can be accessed at this following album.

Poco F2 Pro runs MIUI 11 based on Android 10, also known as “MIUI for Poco”. The difference is, by default this smartphone uses the app drawer separately. During use, no applications were found to interfere, except from Mi Video or the default File Manager. Can be disabled so that it doesn’t appear again, really, so it’s safe.

Other features that are present include Turbo Game, video toolbox to give additional effects when playing videos, as well as other features that are commonly present in MIUI. And of course, because it has a pop-up camera mechanism, the sound effects and the light can be adjusted to each taste. Want to be made without any noise if you feel disturbing.

Mono speakers that are placed below have mediocre quality. It’s tight, but the details aren’t the best. A little unfortunate considering the screen is very good. But for those of you who have quality cable earphones, Poco F2 Pro already supports Hi-Res Audio.

But when I pair it with TWS earphones like Samsung Galaxy Buds Plus and Huawei FreeBuds 3i, the sound output in my opinion is not as good as in the real X2 Pro that supports Dolby Atmos or iPhone XR. At least one level below the other two smartphones, the alias is still very enjoyable.

Poco F2 Pro also features a linear motor that feels great vibrations. I turned on this feature for the virtual keyboard – unfortunately the intensity of vibration can not be reduced. Speaking of the keyboard, when using full screen gestures, Poco does not give pause free space under the keyboard. So the position is too down, which makes me finally have to use the option of three capacitive buttons. 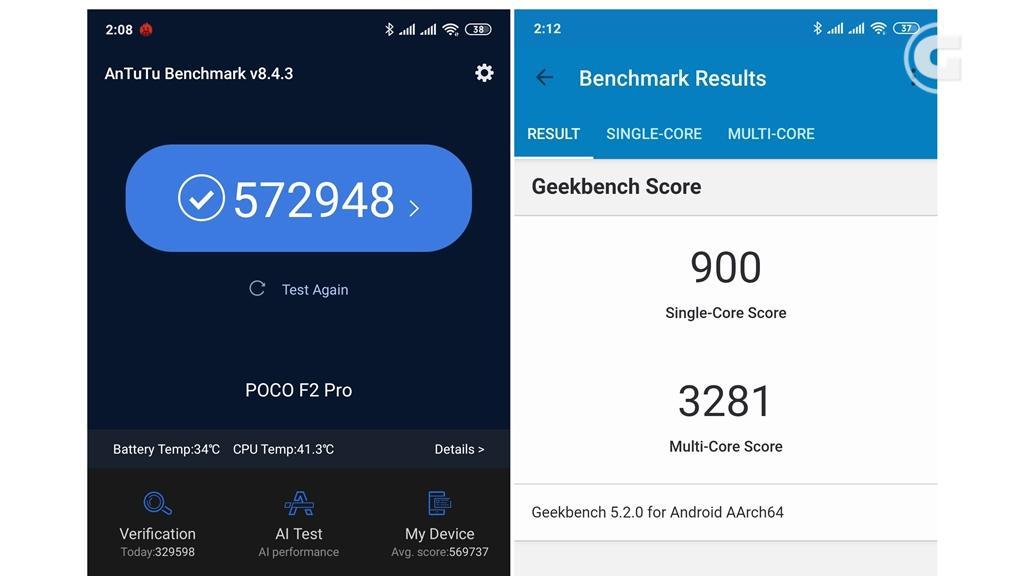 Qualcomm Snapdragon 865 Plus 7nm, GPU Adreno 650, LPDDR5 RAM (LPDDR4x for 6GB variants) and UFS 3.1 storage. The best combination for a smartphone release in mid-2020. You can be sure everything runs quickly, both open applications and multitasking, although the variant reviewed this time has 6GB of RAM ‘only’.

Even though it is used without a case, I almost never feel heat when using Poco F2 Pro. Maybe thanks to LiquidCool 2.0 technology which consists of several layers of cooling and a vapor chamber that covers 28% of the body. The cooler is claimed to be able to reduce CPU heat to 14 degrees celcius.

The first time you access PUBG Mobile, the default graphics are HD – High, but if you switch to HDR – Extreme, the game is still very comfortable to play without disturbing any frame drop. Playing is also certainly very comfortable thanks to the screen that is free from the front camera piece. During use, it only feels warm which is very reasonable. Connections also run smoothly.

Speaking of connectivity, Poco F2 Pro also supports 5G networks. It’s just that when activated, only one SIM can be used, aka SIM slot 2 automatically turns off. This option can be activated on the global unit that I tested. Chances are when the official unit is released, this option will still be locked until regulations in Indonesia are ready.

Besides being a premium material, the weight of the Poco F2 Pro also comes from its relatively large battery capacity at 4,700 mAh. Charging can happen quickly, with support for 30W fast charge or the QuickCharge 4.0+ standard. Xiaomi has also included a 33 watt charger in the sales package, so there is no need to buy additional accessories.

With intensive use without gaming, including turning on AOD, connecting to a smartwatch, taking photos and videos intensely including ups and downs of pop-up cameras, this smartphone can turn on all day with a screen-on time of approximately 5 hours. While for more relaxed use, it can achieve the same SOT, but within 1.5 days of use. When it runs out, just wait a little more hour to fully charge.

Poco F2 Pro is present in Indonesia in two variants of RAM memory and internal storage. The cheapest variant, with 6GB + 128GB of memory, the price of POCO F2 is IDR 6.999 million. While a higher variant with a capacity of 8GB + 256GB is priced at Rp7,999 million.

With these two prices, then Poco F2 Pro in Indonesia is arguably cheaper than European prices. The official price is also in accordance with leaks that a few days ago circulated on social media. 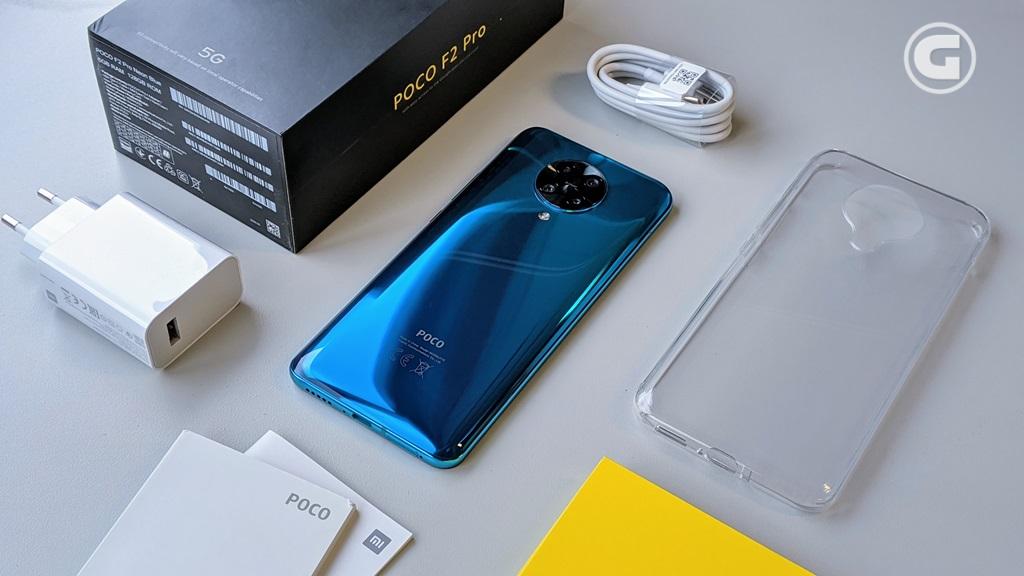 This device is not exactly a smartphone that origin fast. In a way, the design is one of the best in its class. Being an affordable flagship, I think Xiaomi has made the right decisions to cut features here and there that don’t interfere with usage.

Mono speakers are standard, but at least there is a 3.5mm audio jack that supports Hi-Res Audio. The screen isn’t 90Hz yet, but the AMOLED panel has accurate color reproduction. Not yet designed waterproof, but the pop-up camera mechanism makes the front screen present without interruption. Not yet to support wireless charging, but the battery capacity is quite large.

Notification LED, IR blaster to NFC are also available. This smartphone is not only suitable for Gizmo friends who are pursuing the right-level specifications, but also able to provide a good even experience on almost all lines. Make Poco F2 Pro easy to recommend to anyone, as well as the cheapest official 5G smartphone in Indonesia.

Buy a Xiaomi smartphone at:

The Indonesian version of Poco F2 Pro review can be read in Gizmologi.ID