byPrasetyo Herfianto
in Apps
Reading Time: 3 mins read
A A
0

social media such as umma is one of the many ways we can stay connected, even in pandemic situations like today. With the social distancing policy to stay at home, the government limits all forms of activities in public places, including religious activities.

As a social media platform for Muslims from Indonesia, umma presents several special features in order to offer convenience for Muslims. Both in worship, learning, interacting and sharing information between people, especially in the current Ramadan.

Indra Wiralaksana, umma’s co-founder & CEO, said that at this time it was important for Muslims to maximize their worship activities from home in the midst of the PSBB policy, which made it impossible for face-to-face meetings in public places.

From the results of his observations, since the appeal to do physical distancing, umma application users miss the studies of the scientific assembly. “In accordance with our mission, umma as the largest Muslim social media in Indonesia is ready to help Indonesian Muslims to continue together to become better Muslims, through the use of technology for worship while at home,” Indra said in Jakarta (22/4).
Also read: TikTok, Social Media Application for Music Video Enter Indonesia Market 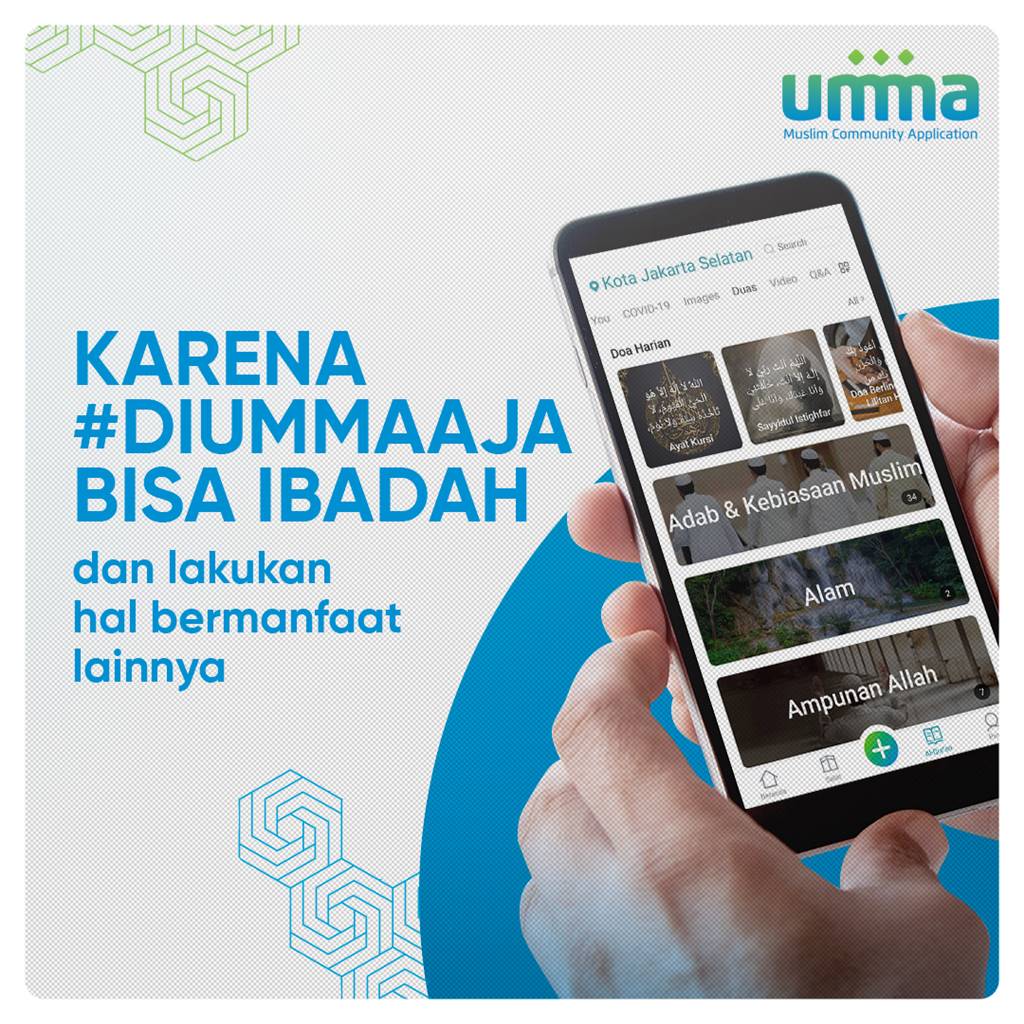 For those who are still unfamiliar, umma is a social media platform based on artificial intelligence technology that was founded by young Indonesians in April 2019. This application was developed with the aim of helping Muslims to worship and share the good with the use of technology.

umma provides a variety of religious support features such as the Qur’an and translations, Qibla Direction, and Prayer Times. As a social media platform, users can share the goodness by uploading Islamic content on umma.

The application has several essential features that can be utilized by Muslim users. The main supporting features such as prayer schedule, GPS-based Qibla direction, and Al-Quran are available in the application. In addition to these features, umma prepared several special features to maximize Muslim worship at home during Ramadan.

Through the hashtag ‘#diummaaja’, they invite users to continue to worship and do other useful things while still doing activities at home.

Since its launch in April 2019, the umma app has been downloaded by more than 8 million users, with an active user growth reaching 400% since Ramadan last year. “Ahead of Ramadan 1441 H, the umma platform is ready to support Muslims in Indonesia so that they can worship #diummaaja more optimally,” Indra said.

In addition to the main worship support features such as the prayer schedule, GPS-based qibla and Al-Qur’an direction, umma has prepared several special features to maximize Muslim worship at home during Ramadan this time, namely:

One, Daily worship journal feature presented as a reminder for umma users to perform daily worship activities. The achievement mark of worship in the form of a badge based on user activity was also launched, with worship missions such as reading the Koran for 30 minutes in 5 consecutive days. Later umma will also present other missions such as making electronic greeting cards, which can be shared through social media.

Two, Features of the Qur’an Reading Clinic. To further enliven Ramadan at home, umma will also hold a One Day One Juz program every time to break the fast in the application. And through the Klink Tahsin Read Qur’an, users can check the rules of reading in real-time, recitation and according to the spelling of letters.

Three, Live Streaming Study Feature in umma. Reducing the feeling of longing to be present at the majors or the Islamic boarding school that is usually done every Ramadan, umma presents Live Streaming features. The live broadcast feature of this study facilitates Umma users to be able to discuss and conduct question and answer with Ustad directly from the UMI app. The material will be delivered by experienced Ustad through the Live Streaming feature in Ummah at dawn and before breaking fast.