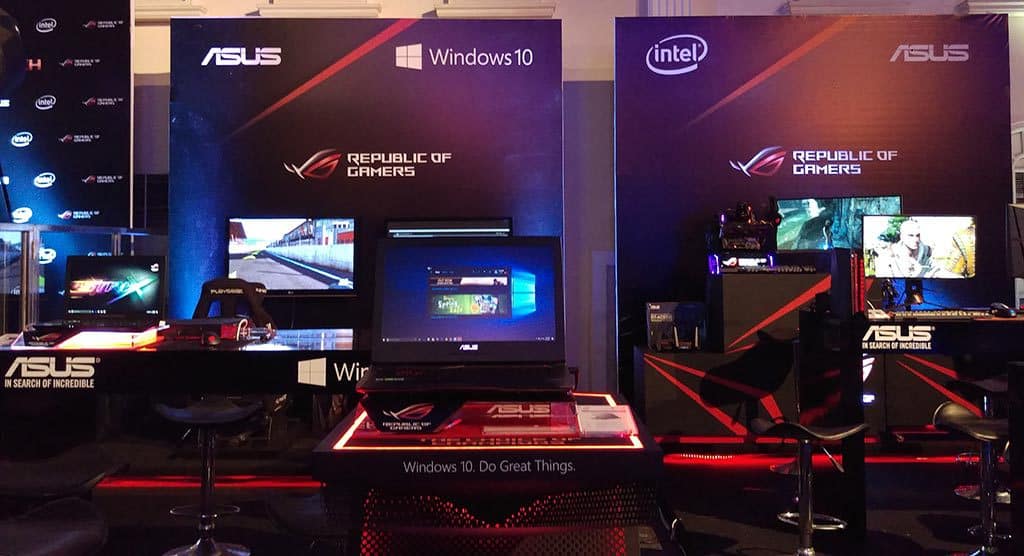 What comes to Your mind when heard there was a gaming notebook that price tag close to a new car? Be surprised, wonder, pensive, do not believe even possible to gawk? Not just You, I became so when yesterday attended the launch event of the ASUS ROG GX800. This laptop is sold with price tag IDR 95,499,000 (around USD 7,500). Yes, with this price, You can already buy a new low-cost green car.

For what Asus to create a device that expensive just to play the game? Will be what kind of ability? The reasonable course appears a variety of questions like that. Because it is the presence of the gaming device of premium class, which are typically priced at tens of millions began to boom lately. The trend of laptop gaming is booming since many people are utilizing the internet network which is already good enough in Indonesia to play the game online. Even them up to show off his game through YouTube.

The trend of laptop gaming is booming since many people are utilizing the internet network which is already good enough in Indonesia to play the game online. Even them up to show off his game through YouTube. This emboldens the Taiwanese company that is captained by Jerry Shen, is to launch a gaming notebook new ASUS ROG GX800. What’s interesting from a gaming laptop this premium so that it is priced very expensive? Let’s find out more.

Overall, the base design of the ASUS ROG GX800 is almost similar to its predecessor ASUS ROG GX700. ASUS seems to want to give the identity for premium gaming devices with the design language of the body are almost exactly the same.

A cursory look at the ASUS ROG GX800 looks almost the same with the gaming machine series high-end ROG G752. Notebook with water cooling separates it has the color of metallic-grey or grey-shiny. In the middle, there is the ASUS logo and two firm lines with a slope angle of about 70 degrees which can be lit.

The Panel LID or cover made of aluminum, even so, the keyboard area and palm rest. While the body of the lower part, in particular, the cover by the cover to access the inner compartment in place to keep the HDD, SSD, and RAM are made of special plastic material.

Although the outside almost exactly the same with another gaming notebook from Asus, is not the case on the components inside. Asus replace almost all important hardware on the device it with the latest technology. Arguably, the successor to the ASUS ROG GX700 is crammed full of new technology which is most updated.

ASUS ROG GX800 features the extensive cross-section of the screen (display) that is large which is of 18.4 inches. Ability components for processing graphics as well as the maximum speed the processor is also updated to be tougher. The specification of Nvidia GTX 1080 graphic card has the CUDA Cores 2560, base clock at 1607 MHz and boost clock 1733 MHz. These graphics cards have the VRAM of 8 GB GDDR5X with path memory bus 256 bit-speed 10 Gbps.

The graphics card used type 2 Way SLI GTX1080. That means there are two pieces of VGA card GTX 1080 are planted in the notebook, then the performance and the performance of both combined to produce a greater force.

This top of the line graphic card from Nvidia has been equipped with the VR Ready features as well as some of the other technologies, among others such as Nvidia G-Sync, Vulkan API, OpenGL and other. All these features are useful to maximize and optimize the in-game effect so it can run smoothly when played.

Automatically, because it contains two graphic cards, ASUS ROG GX800 become thicker and a heavier weight, i.e. 45mm for thick and 5.7 kg for the weight.

The laptop is powered by Intel Core i7-7820HK processor with a high clock speed at 4,6 GH that has a big influence on the performance and processing speed in the computer overall. Here, You can perform overclocking with fairly easy. Clock speed can be increased through pre-installed applications, namely the ASUS Gaming Center. The scenario that can be done, among others, increase the frequency of the voltage on the CPU and GPU manually until a certain threshold.

The most different are, ASUS has redesigned the concept of water cooling in the ROG GX800. In his newest series, ASUS says it has made the flow of the water cooling that is made from the radiator is able to flow through the two pieces of the GPU while the CPU installed in the notebook to cool down the system.

It also is able to make the CPU able to be overclocked to a frequency of 4.6 GHz with safe when in mode docking mode (the notebook has been installed with the water cooling docking). To get the ability of the plenary on this notebook, You must use the docking mode, so that the two VGA and the ability of the CPU can be “tortured”. 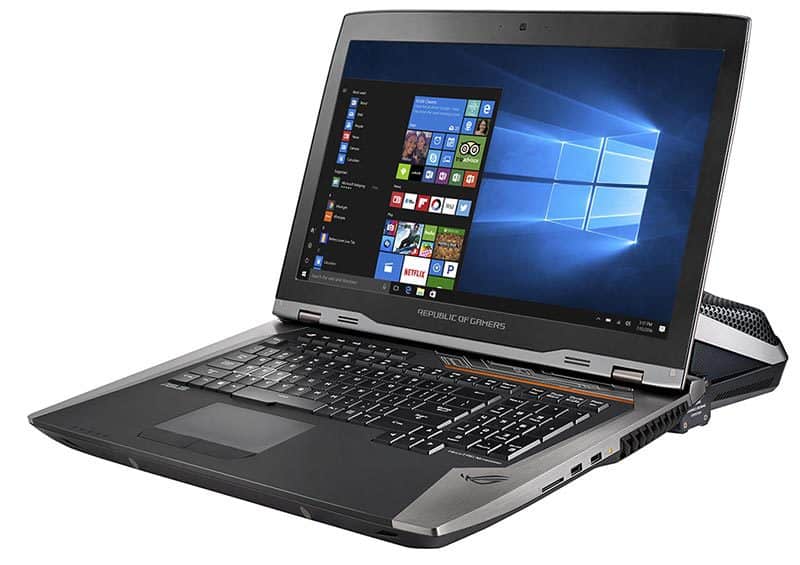 While it is a type of storage media SSD-based added into 3 pieces. ASUS ROG GX800 using storage media made by Samsung, namely the SM951 which is claimed as the fastest Solid State Drive of the century. The SSD also has the features of NVMe, aka Non-Volatile Memory Express, which utilizes PCIE slot 3rd Generation M. 2 to maximize the speed of bandwidth.

Then, the notebook is also equipped with WiFi external antenna capability and speed in capturing the signal to be better than the Wireless antenna standard. ASUS claims the power to reach the capture signal can be boosted up to 50 percent better. Making it easier for gamers when they want to play the game online when not using the LAN.

Switch on the on the design of the body part in, the base design is more refined. ASUS has switched from the single LED keyboard red, be using an RGB keyboard that can emit a variety of colors. Many assumed RGB keyboard is cooler than a single LED. The keyboard has also been using the mechanical which makes it comfortable and the durability is superior. Also, have the trackpad is responsive and has a cruising area.

On the ASUS GX800 mouse are given is the Gladius, is a gaming mouse that can be set the DPI to 6400 and is ideal for the game type First Person Shooter.

ASUS ROG GX800 has a landscape screen measuring 18.3 inches. Very large for the size of the notebook. But, it feels fitting considering this device is a portable computer for the hardcore gamer. Its Display also has to get a matte finish which is useful for making the eyes of the gamers don’t get tired easily. Type of screen such as this help reduces the reflection of light rays from the outside towards the back of the significantly.

ASUS adopt the technology in-plane switching (IPS), which offers accuracy and image reproduction better. IPS display it also supports the greater visual angle 178 degrees which is good in a state vertically or horizontally. The advantage, gamers can get the best position and most comfortable from any angle. In the display has embedded a technology called Splendid Display with four modes: Normal Mode, Eye Care Mode, Vivid Mode and Manual Mode.

With an Ultra HD panel resolution aka 4K (3840X2160),  ASUS ROG GX800 screen has a 60Hz refresh rate. Asus has also equipped it with the NVIDIA G-SYNC technology that smoothes the movement of the image by adjusting the refresh rate of the screen & GPU. So it has the movement that is smooth and is able to eliminate movement broken (screen tearing).

Fundamentally, the concept of ASUS ROG GX800 is a desire to create a mobile computer whose performance can equal a desktop device. ASUS started the research to create the technology water cooling since 2003.

In the implementation, ASUS ROG GX800 is a device that is quite portable although the weight and dimensions are troublesome to carry around. But this is your choice for gamers who really need performance.

While as a workstation or gaming desktop, users can take advantage of docking a special liquid that contains (water cooling) stored neatly in a suitcase. Please be aware, the workings of the docking called Hydro Overclocking Station is working with how to drain the fluid that comes from the tank through the tube of the hose which is pushed by the pump into the device to cool down the system that is working.

The design of radiator of water cooling are made with the same manufacturing process with the cooling system on a car, so can provide refreshment and cooling to the maximum. Water cooling-its also very easy to use because users only live to associate the existing connector in the docking with the notebook.

This machine monsters game has HDMI port 2.0 to facilitate 4K monitor. Unisex display port 1.3 supports 8K monitor (60 Hz) or dual 4K monitor 60Hz. There are 2 pieces of USB 3.1 Type-C supports Thunderbolt 3.0, 3 USB 3.0 Type A, Headphones jack, mic jack, WiFi external Antenna as well as a 2-1 card reader. Not to forget also the LAN port and Kensington lock. These notebooks have the exhaust located at the back of notebook to give off heat. While two vents are located in the right and left of the device is useful for filtering the incoming air.

To support multiplayer gaming like a LAN Party that requires real-time video chat, ASUS also provides features dual array microphones that can capture sound clearly without having to be distracted the sound of noisy environments such as when gaming competition.

Noise Suppression technology owned by ASUS can also do the filtering of noise pollution produced by the user. So that the interlocutor can hear Your voice clearly without being disturbed by another sound which is not desirable.

In addition to high performance to support the gaming experience of the users, ASUS also gives the feature of ASUS GameFirst III which optimizes internet connection for gaming needs compared to other needs that do not support gaming needs. So don’t be afraid to run other applications in the background, or while downloading files from the internet when playing the game, because the internet bandwidth will be prioritized for the needs of gameplay.