The Best Among the More than 1,600 Participants, Here are the Winners of Indonesia Next Apps 4.0 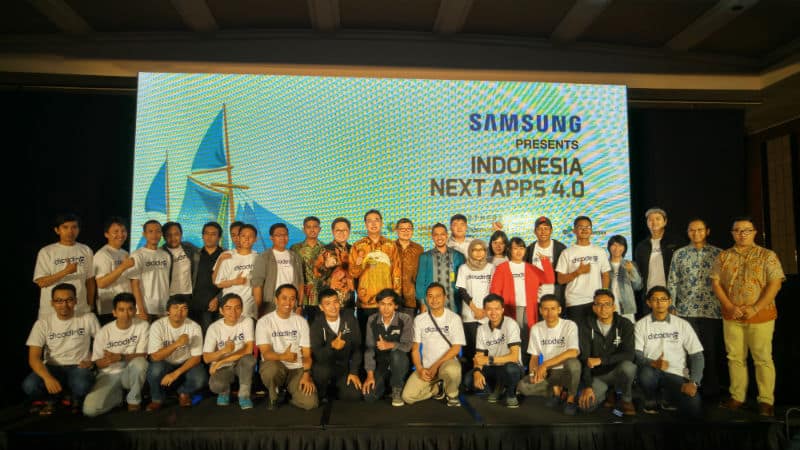 After selecting more than 1,600 developers from all over Indonesia, finally the Indonesia Next Apps 4.0 has got a champion which consists of 16 developers in four categories competed for the prizes worth a total of Rp 600 million. Who are they?

The INA 4.0 event actually took place from July 25 to September 18, 2017, when more than 1,600 participants from Jakarta, Bandung, Jogjakarta, Semarang, Surabaya, Malang, Medan and Makassar demonstrated the innovation. From that period, compiled as many as 976 applications in the calculation of the jury consisting of the developers such as Tommy Dian Pratama, CTO Daily Social; Kevin Kurniawan, COO Dicoding; Narendra Wicaksono, CEO of Dicoding, and Leontinus Alpha Edison, Co-founder & COO Tokopedia. From professional circles, there is Rama Mamuaya, CEO of Daily Social; Amir Karimudin, Editor in Chief Daily Social; Nico Alyus, CEO of OmniVR, and Hermawan Sutanto, Co-founder & COO of Bizzy.

Although coming from various circles, the jury of Indonesia Next Apps 4.0 has agreed to perform the assessment with general criteria, such as application usability, problems that can be solved, features and usefulness of the application. However, in each category or sub-category also has different terms and conditions as needed.

From the long judging process, the jury finally crowned as many as 16 developers and applications as the champion of INA 4.0 whose coronation procession was held in Jakarta last October. The following is a list of the names of the application developers and the winning developers:

Regarding the win, KangHyun Lee, Corporate Affairs Vice President of SEIN hopes that the participants can perfect the knowledge and the results of his work to be utilized for many people. “We are always ready to guide the developers so that later become superior and able to create applications that are useful for the people of Indonesia and even the world,” he said.

Meanwhile, Menkominfo Rudiantara who also attended the event revealed that events such as Indonesia Next Apps 4.0 could be a stimulus for the development of media-based economy and communication. Applications can be rated in the creative sector of the creative sector. “This basic economy needs networking, devices, and solid applications without it being able to walk, so I really appreciate events like this,” he said.

In addition to the winners of these categories, there was a winner with a special category, the category of media choice. So the media that covered the event held at Mid Plaza was given the authority to choose one of the favorite applications.

As one of the media that comes, of course, Gizmologi should try various applications on display in booth Indonesia Next Apps 4.0 that has been provided. Due to the relatively narrow running time, I did not fully try all the existing apps. However, of the many applications that are tried, there is the most interest me, the application Dijamin Halal.

Dijamin Halal is an application developed by Tim Farifam. Not only because it is beneficial to the majority of Indonesian people who are Muslims, the use of this application is very easy. Yes, I just type the name of the desired food or product in the available search field. Later, the information halal product is listed. For example, noodles from Korea Samyang that could make people excited because suspected of containing pork. So I search the name instant noodles, it turns out that the result is already halal, Gizmolovers!

My choice is not missed, it turns out from the many media that present favored the application to make it a winner in the Media Favorite category. Though useful, unfortunate once the Dijamin Halal app is only available in the less popular Tizen OS in Indonesia.

Yes, there may be a point, too, because similar applications in the Android OS has a lot. One of them is Halal MUI which claimed as the official application of LPPOM MUI.

Congratulations to the winners of Indonesia Next Apps 4.0,  keep the good work!

Indonesia is Exploring the Possibility of Establishing the IoT Regulation

Indonesia is Exploring the Possibility of Establishing the IoT Regulation