Nexon LEGO Quest & Collect game has been downloaded more than 1 million times in two weeks since it was first launched in 14 Asian countries. Upon release, the game gained new content from World Boss Raid, where players can use 10 Hero characters to defeat the new enemy, Enemy Bosses. In addition, LEGO Quest & Collect games also get updates in the form of new legendary characters, Bunny Suit Guy and LEGO Ninjago Temple of Airjitzu Diorama World.

For information, LEGO Quest & Collect is a mobile game with RPG concept (role-playing game) developed by game developers from Korea Nexon TT Games and Lego Group. Since its official launch on July 13, 2017, the game has reached one million downloads in August 2017, two weeks from the date of its release. Games for mobile devices is even a Top 5 in the App Store and Google Play in various categories and application market. 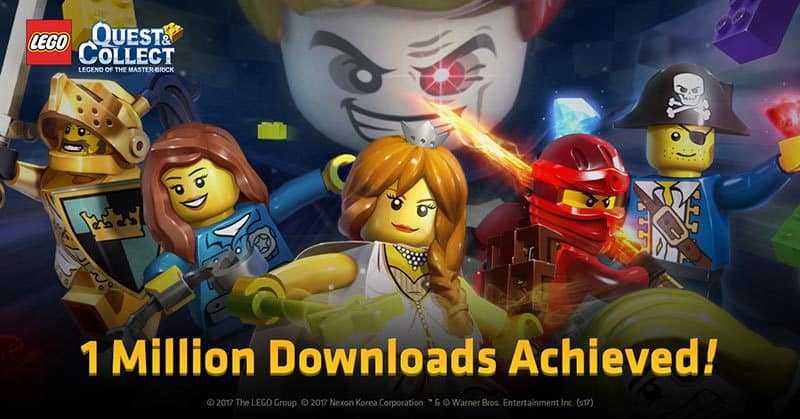 Coinciding with this achievement, Nexon also announced a number of exciting game updates as well as a new game mode, World Boss Raid. This model features the most famous LEGO NEXO KNIGHTS villain, Evil Mobile, and Sparks, which will appear in the boss’s fight and can be played for 24 hours from the start. Players can play 10 Heroes simultaneously, build teams with players from many communities to jointly defeat the World Boss and earn prizes of up to 1,500 crystals.

In the first update of this game, Nexon introduced the new legendary character, Bunny Suit Guy, and also added a new main building in Temple of Airjitzu, one of four existing dioramas. Bunny Suit Guy is a rabbit-clad man, quite popular in LEGO MINIFIGURES  and unique in World Boss Raid. This character can be obtained with a Premium Hero Cube.

The players can now also increase the speed up to 1.5 times in each episode with this update.

To celebrate this achievement, Nexon will hold several game competitions up to August 23rd. In addition to awarding more crystal to players participating in the World Boss Raid, the main players will also have 10 times more chance of getting Treasure Chests in Adventures. Players who reach a certain Diorama level up to August 30 will also receive a Super Soul Bricks (Legend) premium prize.

Hands On: First Impressions at a Glance The Latest Huawei P10 Smartphones

Samsung Galaxy Note 8 Battery Will Not Explode Like Note 7?

Samsung Galaxy Note 8 Battery Will Not Explode Like Note 7?