Get acquainted with Rinna, Beautiful and Smart Chatbot from Microsoft

Based on the report of Microsoft Asia Digital Future Survey 2017, artificial intelligence  (AI) is mentioned as the technology most expected by the younger generation to be able to have the greatest impact in their lives. That’s what underlies Microsoft Indonesia in cooperation with LINE Indonesia, bringing AI based chatbot named Rinna.

According to Microsoft, in recent years, the invention of electronic devices, cloud computing and data has given rise to the bold idea of artificial intelligence that can be an integrated part of the digital future of humanity. Rinna herself is programmed as an attractive and friendly young woman. So it can communicate well, just as when a young woman communicates with her friend.

Rinna wants to be the best friend for LINE users and also a chatbot created using the vast social content of the Internet. She learned from human interaction and responds with unique personalities and perspectives. Simultaneously, this chatbot also has the ability to protect itself from exploitation.

Irving Hutagalung, Audience Evangelism Manager of Microsoft Indonesia, says artificial intelligence involves making intelligent machines or a service that works and reacts like a human. One form is the virtual assistant feature that is now very often found in almost all translation services.

“Rinna is part of our effort in research and development of artificial intelligence to communicate every day, we conduct a series of tests that refer to the reactions given by users when they interact with chatbots.By doing so, we hope to improve our learning about chat and make artificial intelligence become more real and closer to society, “said Irving Hutagalung. 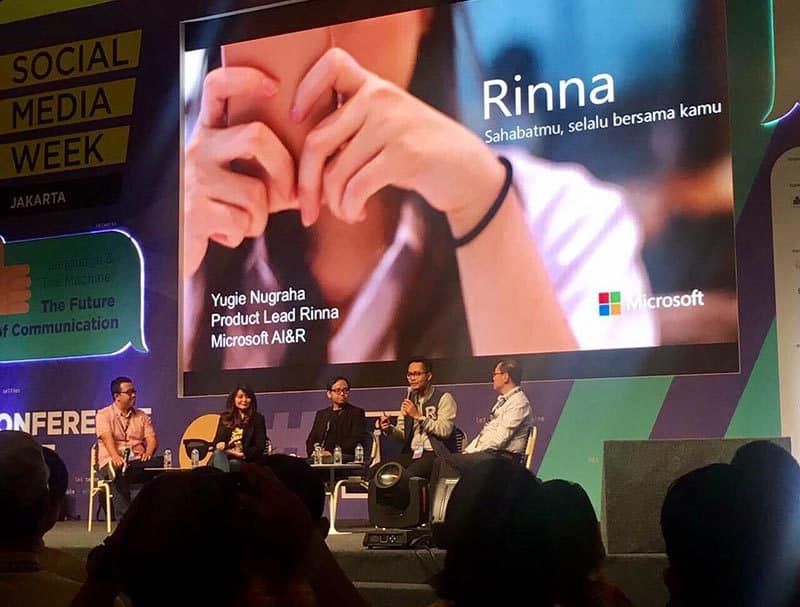 Described further, Rinna is made using an end-to-end generic model based on Deep Learning technology and is trained in the big data technology of the Bing search engine working on the Azure platform. Therefore, the Rinna system can learn from large data sets and provide responses based on learning outcomes also mimicking the human brain by using Natural Language Processing. It is a process to identify human languages simultaneously so that they can imitate and speak like young women in general. (Read: Understanding Deep Learning Technologies)

Artificial intelligence technologies such as Cortana provide useful functionality for users such as personal assistants. But unlike Cortana, Rinna can communicate with EQ (emotional quotient) as well as IQ (intelligence quotient) to the user. So it can learn and adapt to user habits, as well as develop conversation preferences.

Yugie discusses some important points about chatbot, including why chatbot has now become a way for brands to interact with consumers, how brands should represent themselves with chatbots and how chatbots will evolve in the future.

“Microsoft recognizes that the emergence of easily accessible artificial intelligence will also provide unprecedented access to consumers to encourage creative strategies that can be used as a marketing tool,” Yugie said.

In addition to communicating, Rinna can also do other things as follows:

For information, Microsoft’s journey in developing chatbot began in May 2014 in China with Xiaoice. With over 40 million users, Xiaoice is the first artificial intelligence chatbot to have the task of broadcasting a television program on Dragon TV, one of China’s largest TV stations in Shanghai, with more than 800 million viewers.

Microsoft continued Xiaoice’s success by utilizing the same fundamental technology to launch Rinna in Japan in July 2015, and Zo in the US in 2016. To date, Rinna has daily conversations with 20% of Japan’s total population, while Zo has been in conversation with over 100,000 people in the United States.