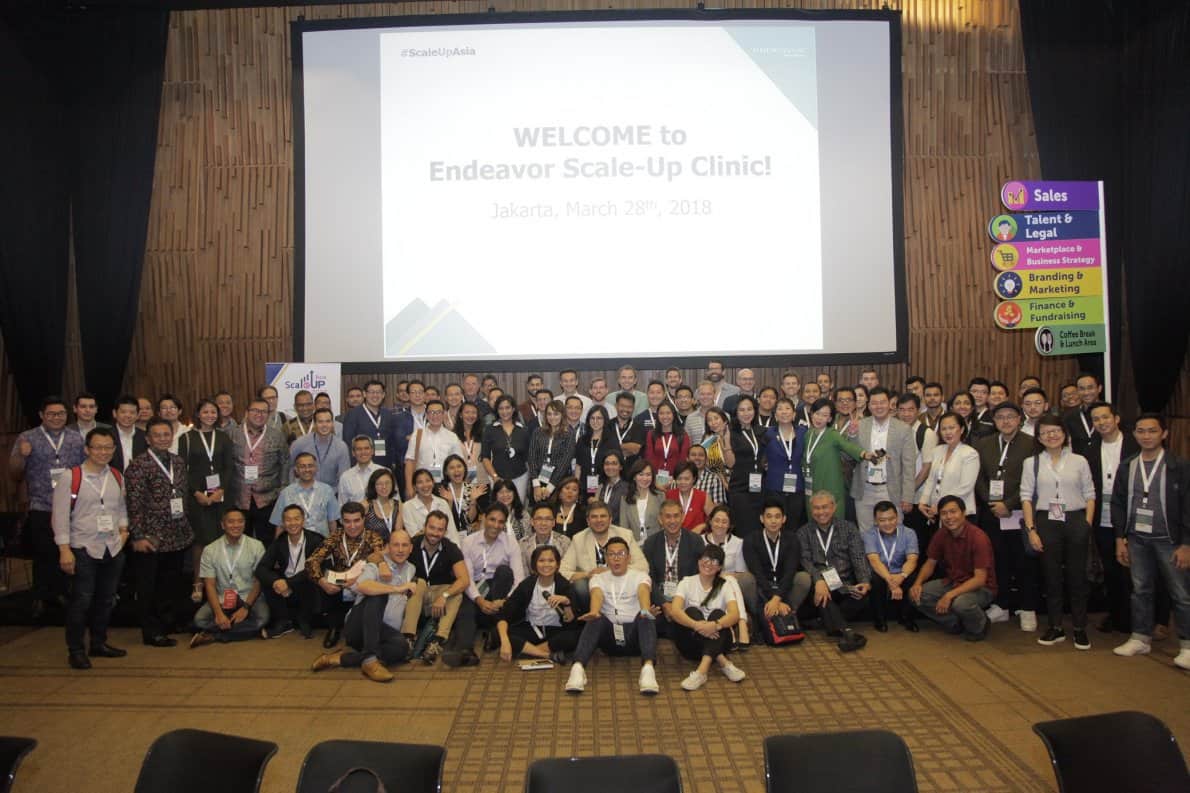 Quoting an African saying, if you want to go fast, go alone. If you wish to go far, go together. The saying seems proper to be labeled to Scale-Up Asia 2018 event that was held by Endeavor Indonesia on March 28, 2018, in Jakarta Pusat.

Dozens of entrepreneurs in the country were flocking one of the rooms in an elite shopping mall in Jakarta Pusat in Scale-Up Asia 2018 event. Not only they were joining with other entrepreneurs, they were also learning from dozens of experts who have been successfully running their own businesses.

This year’s Scale-Up Asia 2018 theme “50 Shades of Scale-Up” wishes to build an entrepreneurship ecosystem through High-Impact Entreprenuership or HIE movement which at the end hopes to improve national economy.

Some interesting topics that were discussed by mentors, are “Building Strong Culture and Winning Teams”, “An Accelerated Growth: The Spicy Journey”, “Living Your Best Startup Life” and “Driving and Measuring My Metric for Success”.

Some mentors who are currently popular in startup world were also present to have shared some knowledge in the Scale-Up Asia 2018 event. Some of them were Achmad Zaky, CEO and founder of Bukalapak, Stefanie Kurniadi as the founder and deputy marketing director of CRP Group and Irzan Raditya as the CEO and founder of Kata.ai.

The three were sharing the first stories initiating their businesses. Both Achmad Zaky and Stefanie admitted they were starting their enterprises from each rented room when studying at universities.

Achmad said that Bukalapak’s journey began eight years ago along with his friend in his rented room.

“Our moment was precise. At that time, not many people began e-commerce. Then in 2011, there were many investments. We had moment every year. We had never thought (becoming this successful),” Achmad said in a press conference of the Scale-Up Asia 2018 yesterday.

For him, Bukalapak’s keys of successes are full of millions of actions and thousands of failures. “We did small actions every day. Meeting every day. Working up till at night. Offering to friends, sellers via WA, Facebook,” he said.

In a similar tone with Achmad, Stefanie begins her business in her rented room in Bandung together with her friends. At that time my parents were in crises. We didn’t have money to pay my university fee so I had to work,” Stefanie, 32 years old, said.

Later, she and her fellows who are able in designing and branding begin setting up an agency then starting looking for clients. But they shift the business to culinary.

“We were once having a lot of debts. Eventually, we open a new business with the same team,” she said in the Scale-Up Asia 2018 event.

She said she and her friends were opening the first stall, which was ‘Nasi Goreng Mafia” or “Fried Rice Mafia” nearby Padjajaran University, Bandung.

“We started from scratch. Some of us borrowed money from parents. Some took from their savings. Now we have 114 outlets,” she said. Aside from Fried Rice Mafia, CRP Group owns brand Warunk Upnormal.

Irzan was highlighting the importance of self-awareness of each entrepreneur. “Must be creative because of limited resources. Also must realize our strengths and weaknesses,” said Irzan, 29 years old.

Apart from following passion and purpose, Irzan suggested that startups were also focusing on solving most people problems. Like his business, Kata.ai, on which Irzan wishes to provide a chatbox where which users can chat using artificial intelligence technology.

Scale-Up Asia 2018 is one the biggest events from Endeavor Indonesia, which is part of the global entrepreneurship movement. In Indonesia, Endeavor has been running for six years and selects more than 3,000 entrepreneurs then supports 38 of them.

Alibaba Investment to Lazada To Be Increased US$2 Billion