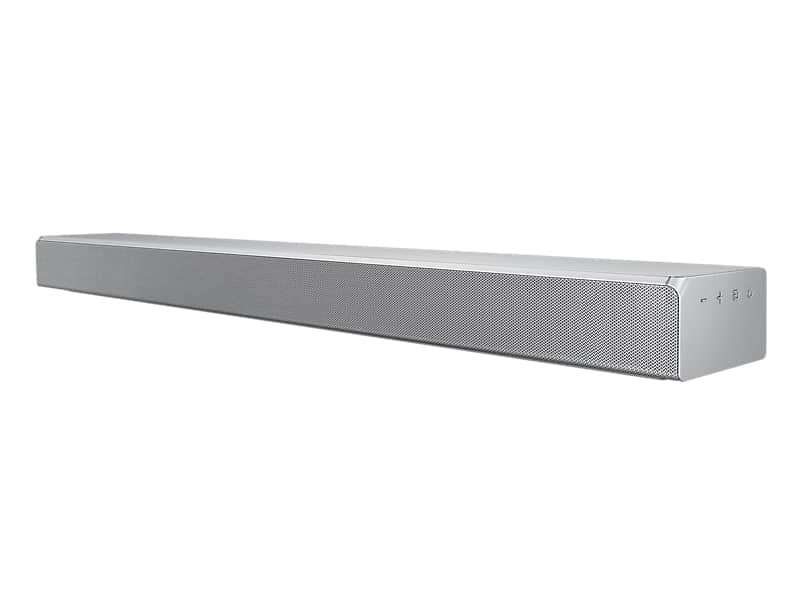 Samsung Soundbar Sound+ offers a lot of things that will be loved by the audiophile, especially those who want a home entertainment feels magnificent. How cool is it?

As the name implies, Samsung Soundbar Sound+ looks like a beam in general, namely a rectangular box with a grill in the front as a place to release the sound. Different with the previous generation, this soundbar comes with the concept of the design of the one-body where the subwoofer has been fused in it or not separate from the speaker. With its minimalist design, of course, make the placement more practical, even for a room that narrow.

Even though the design is minimalist, the output voice is not. Yes, when Gizmologi test the output sound when the device is introduced in the Bali National Golf Club, Monday (5/15/2017), sounds so fancy. Even the sound of the bass that is produced is fairly “kicking” even without an additional subwoofer.

As the first soundbar from Samsung that was presented without a separate subwoofer, of course, makes these devices so easy to install. There are even additional accessories one mount kits that make this device can be connected with the QLED TV without having to perforate the wall. With these accessories, both devices can be mutually connected only with one cable only.

Although impressed only one device standalone, Samsung Soundbar Sound+ has 9 built-in speakers in it with a dedicated amplifier configuration has been customized by Samsung’s Audio Lab in California. By doing so, the sound output that generated a high-resolution 96 kHz/24 Bits that can be tailored to the tastes of consumers.

If you want to get the quality of sound fitting, available features Wide Range Tweeter that allows this device can deliver sound with a broad frequency perfectly without the constraints of sitting position. So no matter where the position of the seat, the user can still get the sound output that precision, and the same good from different angles.

Samsung Soundbar Sound+ also has technology Distortion Cancelling can predict the potential distortion that able to reduce the distortion of the output generated sound because it is able to predict its potential before it is issued to be heard. So any kind of audio which wants to be heard, there will be no distortion that reduces the enjoyment in listening to the sound of music or movies.

According to Harris Pranata Wijaya, Marketing Manager of Samsung Electronics Indonesia, Samsung Soundbar Sound+ is a proper device for those who want a means of entertainment in the home and beautify the room.

“Although small, Samsung Soundbar Sound+ able to make a sound that reaches up to 50 square meters. So, do not be fooled by its small look,” he said.

3 Advantages of Samsung QLED TV You Should Know