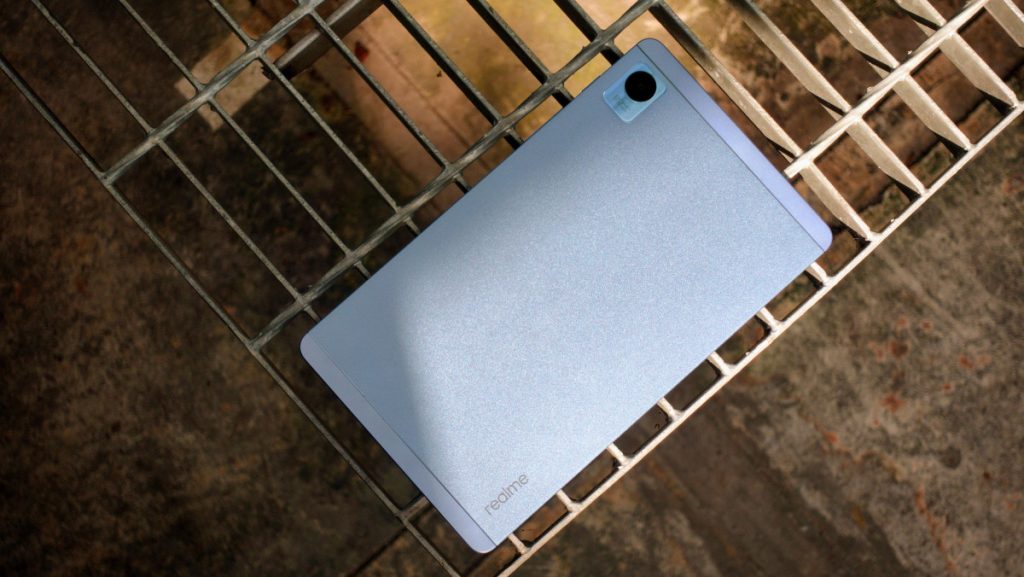 Since the pandemic began two years ago, the popularity of large-screen compact devices such as tablets has continued to rise. The existence of a remote work and school system encourages people to need a tablet, until now. So the presence of the realme Pad mini can be said to be right.

Not the 10 inch one, but the smaller one. Even though it carries a “mini” appendage, this first tablet from realme Indonesia can still carry a fairly large screen dimension. Perfect for accessing multimedia content, to editing documents and video calls from popular platforms. Easy to carry to support hybrid work system.

With a very affordable price tag, has realme managed to provide the best choice for its consumers? Here’s a full review of the realme Pad mini.

Although affordable, the design of the realme Pad mini in my opinion looks like a tablet with a much more premium price class. It looks very modern and, true to its name, compact. Although it has a relatively large screen.

Realme Indonesia’s first tablet has a thickness of less than 8mm—7.6mm to be precise. It also weighs only 372 grams, aka still comfortable to carry with one hand. So it’s suitable to be used to read digital books while on public transportation such as the busway (also make sure you always pay attention to your surroundings, okay).

The blue color that I use looks just right, not too dominant and bright enough. The body even uses aluminum alloy material, and it does feel premium in the hand. Unfortunately, it’s quite slippery and doesn’t fit well for me, who has palms that tend to sweat easily.

Its dimensions make the realme Pad mini tablet easy to tuck into various storage places. Starting from a small tote bag, including a sling bag, and will not be too heavy to carry all day.

Even though it’s called a mini, the screen size of the realme Pad mini in my opinion is quite wide. The span reaches 8.7 inches, with a WXGA + resolution which is quite standard in its class. It’s enough to access the site in desktop mode without having to zoom—as long as it’s in landscape position.

The quality is also okay, with just the right saturation and fairly deep black levels. The left and right bezels are also very thin, while the top and bottom are slightly thicker for the right reason—as a thumb “rest” when gripping it with two hands in landscape position.

realme also provides an eye protection feature so it doesn’t tire your eyes when using it for a long time like watching movies or reading digital books. The night mode can also provide minimal brightness, up to 2 nits, so it’s safe when used in dark lighting.

realme Pad mini is equipped with two cameras, one for each side. Up front, there is a 5MP sensor embedded into the top bezel in portrait position. The quality is very good enough for just video calls, or the occasional selfie in good lighting conditions.

While the rear camera has an 8MP resolution with autofocus. No flash, also no night mode, but at least there is a portrait mode even though there is no depth sensor. There’s even a professional mode with manually adjustable ISO and shutter speed.

The photo quality of the realme Pad mini camera is still okay for outdoor use or abundant light. Indoor conditions are still okay, with noise that is still understandable for an affordable tablet.

The rear camera of the realme Pad mini can record video up to 1080p 30fps resolution, without EIS (and 720p 30fps from the front camera). Again, for an affordable tablet, it’s more than enough.

When the device is first turned on, the realme Pad mini runs the special realme UI Pad operating system which unfortunately is based on Android 11. I personally don’t have a problem with this, as long as I can access applications smoothly. The interface is also quite clean, close to pure Android, so it’s easy to use.

With a large screen dimension, you can run two applications at once via Multi-Window mode, which can be accessed easily via the multitasking menu. It can’t be more than that, there’s also no floating window mode—this one feels more suitable for tablets with larger screens.

Without much customization, realme integrates Google Kids Space into realme Pad mini. This feature is able to give parents full control of their child’s activities on the tablet. Starting from the application access time limit, listing what can be accessed, and reporting directly to the smartphone.

Although the dimensions are thin and compact, the realme Pad mini’s stereo speaker setup is loud enough to fill one room. Not the best in quality, because the bass is relatively thin. At least it is suitable for content such as movies or other popular content such as podcasts.

In terms of specifications, the chipset embedded in the realme Pad mini is okay in its class, and is dubbed “The Most Powerful Mini Tablet in 2022”. Namely Unisoc Tiger T616 with 8 CPU cores and 12nm fabrication. The highest CPU frequency with the Cortex-A75 configuration reaches 2GHz, aka faster than tablets in its class.

Combined with a RAM capacity of up to 4GB and UFS 2.1 to 64GB of internal storage, the performance of the realme Pad mini is quite sufficient. For accessing social media applications, sorting out viewing in applications such as YouTube and Netflix, reading books via Google Play Books is still very convenient.

But honestly I wish the performance could be faster, because the chipset should be more responsive. This tablet is not suitable for playing games, except for very light titles. Maybe it still needs a few more improvements via software updates later.

Devices such as tablets do mostly have a larger battery capacity than smartphones. Including the realme Pad mini battery which is bigger than tablets in its class, reaching 6,400 mAh. It is very sufficient for daily use.

With a lighter intensity than using a smartphone, even the realme Pad mini battery can be enough for two days. Unless Gizmo friends use this device to watch television series continuously. If you just browse or read digital books, you can still take more than a day.

Another attraction of the realme Pad mini is the support for 18W fast charging. Charging from low to full takes more than two hours—feels like a long time, indeed. But keep in mind, the size is not the same as a smartphone, so it’s still natural if it’s not less than two hours.

Being the first tablet at an affordable price, you could say that realme has succeeded in concocting a device that is suitable for various people’s needs. Not perfect, indeed, with a number of minor flaws. At least it can meet the needs or essential functions.

And it brings a number of plus values ​​that are no less interesting, such as a premium design and long battery life. realme Pad mini is present in Indonesia in Wi-Fi only configuration and 4G LTE SIM card support. So that it can target more precise target consumers.

The realme Pad mini WiFi version (3+32GB) is priced at a special price during the flash sale period from 23 – 31 August 2022, every 10:00 WIB via realme’s official e-commerce partner at Shopee and Tokopedia which is IDR 1,999,000. Meanwhile, the realme Pad mini WiFi version (4GB+64GB) is released at a special price of IDR 2,499,000 with the same flash sale period at the official e-commerce partner realme at Lazada and Tokopedia.