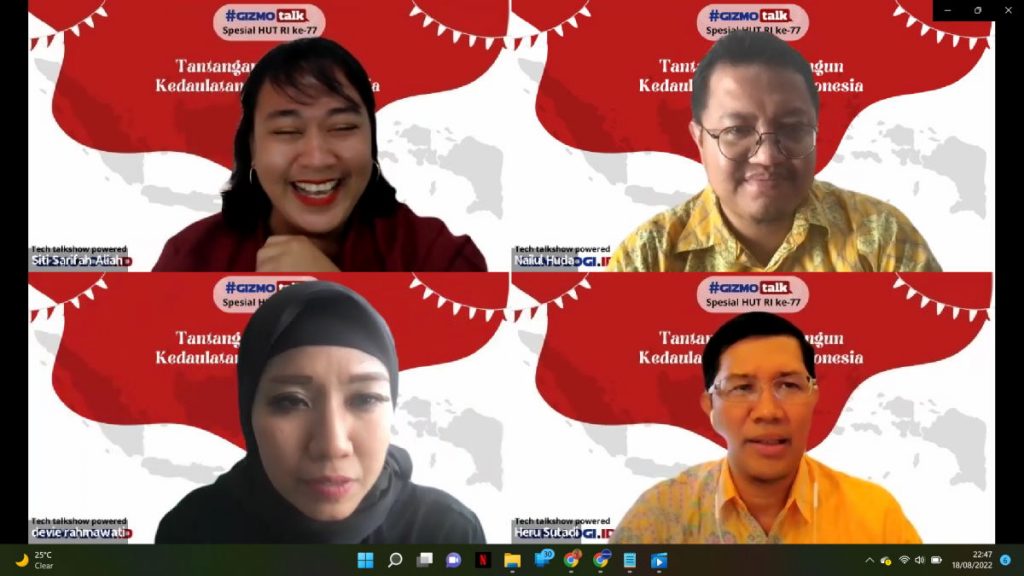 Jakarta, Gizmologi – According to Devie Rahmawati, Expert Staff of the Minister of Communications and Informatics, understanding of the sovereignty of people’s personal data is still relatively minimal, even though in 2021 massive illegal loans have been operating, bringing victims.

“Based on several studies, unfortunately, real losses are exposed through victims in Indonesia, not reporting to the authorities. Whereas with their reports they can help or have the capital to track down digital criminals. Most of the victims choose silence, because they are ashamed and choose to surrender, some even think this is fate,” said Devie while talking at the Gizmotalk event: The Challenge of Building Digital Sovereignty in Indonesia (18/8).

He added that here the challenge is sociologically, the community needs to be helped so as not to give anyone the opportunity to provide personal data which in the end can impoverish the community. “In 2020, there were recorded losses of around Rp. 114 trillion. There are pension funds, hajj savings, and so on that are just lost and stolen due to not having digital literacy awareness,” he said.

Data theft is carried out from the forest

Devie revealed an interesting finding. There is one area where according to the authorities, 5 years ago there was a data theft case with a loss value of Rp. 28 billion. This incident was carried out by a community somewhere in the forests and then looking for a signal to run the mode.

“Their method is to become a priority customer. One area of ​​the profession is the same, when the police take action at the stake, because they have firearms and are ready to fight. The area is also difficult to reach, you have to use an off-road car,” he said.

He calls this a social engineering method to provoke the psychology of potential victims to
share data unknowingly via OTP and hack the account.

How to cover the problem above, because the leak is already down. Police friends stated that crime in the virtual and real worlds competed with each other. Unfortunately not all victims report. This is a challenge that requires the cooperation of all parties.

“By reporting, you can become a hero because helping others does not become a victim,” he added.

Gen Z is digitally literate, but also the most ignorant

He also added that educational programs will not stop in one generation. Many think that Gen Z is a digitally literate people. Gen Z children are actually the newest generation who are also the most ignorant of security. This is the most dangerous because they feel they know the most, they are the most vulnerable.

“Whoever the next leader is, this will always be a challenge because it concerns poverty. If there is poverty, there will be instability and certain information can be inserted by irresponsible parties. Usually people who are hungry are people who get angry easily,” he said.

He admits that these various conditions are part of his homework by continuing to travel to the community to teach digital skills. Moreover, our society sociologically maintains harmony, if it feels close to its sincerity, it lends other things that can be dangerous if the context is personal.

The Ministry of Communication and Information has a Digital Cakap Indonesia Program which is carried out in stages to the general public. The target every year there are 10 million people. So at least in 2024 50 million people have been educated. This program is fast, it needs to move together.