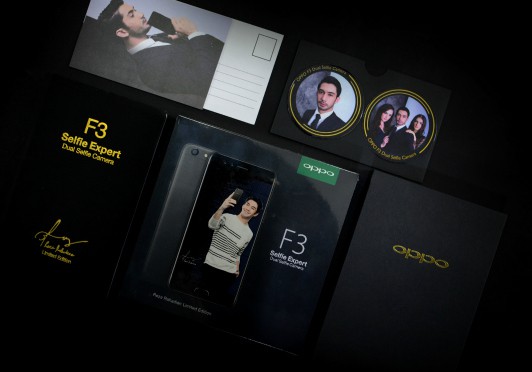 OPPO F3 Reza Rahadian has proven to repeat the success of Raisa Phone which is a special edition of the F1s. By providing only 600 units, the smartphone is finally sold out by the customers who did pre-order since 9 June.

Yes, the smartphone titled OPPO F3 Reza Rahadian Limited Edition has finally closed their pre-order session on Friday (16/06/2017). Oppo Indonesia claims that the units available have been sold according to the target.

“We are pleased to reserve the OPOO F3 Reza Rahadian device sold to our target, thanks to the responses given by consumers and Pilarez as Reza Rahadian’s fans for this device,” said Alinna Wenxin, Brand Manager of OPPO Indonesia through a press release received by Gizmologi.

Alinna explained, after pre-orders closed, they will be coordinating for pick-up and delivery of devices to reception. Such delivery will be sent to the start date of 17-21 June 2017. So, the subscribers can already enjoy the dual-selfie smartphone feature on Eid al-Fitr.

As we know, the OPPO F3 Reza Rahadian Limited Edition is like a version of the black color of the F3 gold that been released in the market. This Smartphone has the advantage on the features of the front camera. where one lens resolution 16 MP for a conventional selfie and other one lens with a resolution of 8 MP wide-angle up to 120 degrees for selfie group.

From the specifications and design, OPPO F3 Reza Rahadian has no difference with the original F3, only on the body of this smartphone is more matte when grasped and has engraved laser engraved of Reza Rahadian signature. In addition, this smartphone also has special packaging that contains collectible items and exclusive gift.

Well, OPPO F3 itself is a “mini” version of the F3 Plus with a 5.5-inch screen that offers the dual-selfie camera as the main feature. For the hardware, the smartphone has powered by octa-core processor, 4 GB RAM, and 64 GB of internal memory that can be expanded up to 128 GB with microSD.

For those of you who miss the opportunity to have OPPO F3 Reza Rahadian, do not worry because OPPO has prepared F3 Black Edition which will be available before Lebaran holiday. This smartphone has similar design and color to OPPO F3 Reza Rahadian, except without the packing and exclusive gimmick, as well as the signature of the actor.

How DOKU Increases Online Shopping Activities in Ramadhan Through Diorama

How DOKU Increases Online Shopping Activities in Ramadhan Through Diorama